Mine That Bird to Lead Post Parade for Derby Prep

The 14th running of the $120,000 Mine That Bird Derby on Saturday at Sunland Park Racetrack and Casino has lured a terrific field of 10 going one mile and one sixteenth.

Racing for the leading trainer Justin Evans, Rebranded has blossomed in the southwest following a campaign on the East Coast.  The three-year-old bay colt by Tiznow won the Riley Allison on Dec. 22 with a powerful late kick under leading jockey Ry Eikleberry. Since that victory, Rebranded has reeled off four very impressive workouts all at five furlongs. He breaks from post position number 1.

Proceed, the dynamic 4 and ¾ length winner of the Red Hedeman Mile, is unbeaten in two route starts for trainer Joel Marr. The New Mexico-bred sensation overcame trouble on the first turn of the Red Hedeman and still drew away with a commanding performance. The distance loving Desert God colt will be ridden by Alfredo Juarez, Jr. 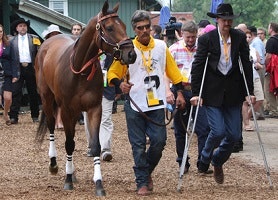 Mine That Bird, 50-1 longshot winner of the 2009 Kentucky Derby, will return to Sunland Park Racetrack and Casino on Saturday to lead the post parade for the 2014 Mine That Bird Derby.

Arguably the most important horse in Sunland Park racing history, Mine That Bird was shipped from Canada to Sunland Park in the spring of 2009. The graded Woodbine stakes winner would finish second in the Borderland Derby (renamed the Mine That Bird Derby) and fourth in the $800,000 Sunland Derby to Kelly Leak.

Trainer Chip Woolley trucked the gelded son of Birdstone to Churchill Downs and the rest was history. Mine That Bird became the first New Mexico-based horse to win the Kentucky Derby. Under Calvin Borel remarkable rail skimming ride, Mine That Bird past every runner in the race and won by  the widest margin in Kentucky Derby history over a muddy track.

Owned by Mark Allen and Leonard Blach, Mine That Bird went on to finish a game second to Rachel Alexandra in the 2009 Preakness and finished third to Summer Bird in the Belmont Stakes.

Racing fans are invited to get an up close and personal view of Mine That Bird as he is saddled in the paddock and comes out onto the track for the Mine That Bird Derby post parade. His story will fill the screen in the upcoming feature film “50-1” to be released next month.