While many horse racing fans will view the early start of the week as the preliminary countdown to Wednesday's post position draw for Saturday's Grade I, $2 million Kentucky Derby, many standardbred enthusiasts will nevertheless want to begin padding their bankrolls via the Monday card at Harrington Raceway and the Tuesday program at Rosecroft Raceway. 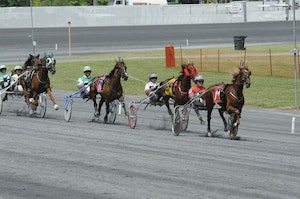 Monday's card at Harrington offers a trio of races for horses that might want to take aim at two of the track's premier events; the $40,000 Governor's Cup on the lucrative Governor's Day card on July 30 and the $200,000 Robert Quillen Memorial - this year rewritten as an invitational - five months from now on September 21.

In Monday's second race at Harrington, a conditioned event for those pacers that have not earned $80,001 lifetime, both Dewey Beach (Tony Morgan) and New Patrol (George Dennis) will look to continue their climb into Open company. Dewey Beach has won three of 11 starts this year for owner-trainer Arty Foster and drew favorably in this spot, while New Patrol is fresh off a sharp, four-length score against non-winners of $50,001 lifetime company for trainer Kevin Lare and owner Frank Chick. The talented four-year-old has already won five of 12 starts this year and been worse than third only twice.

Several races later in the $12,000 Open II class for pacers, Tauranga (Jonathan Roberts) will seek his second straight win in this class although he will have to overcome the dreaded eight hole to do so. Tauranga had little trouble gaining command from post six last week and led throughout to score in 1:51.4, so a repeat performance could earn him a spot in the top Open.

Speaking of the $16,000 Open, carded as the sixth race on the program, Just A Jolt (Victor Kirby) will look to regain his winning ways when he starts from post three. Last season's dominant Delaware-owned pacer when he boasted 16 wins from 36 starts and banked nearly $225,000 for trainer Jim King, Jr., Just A Jolt is looking to regain that lost luster. He sports a modest 2-4-2 slate and $66,000 bankroll from 12 starts this year, but looms as the favorite in this spot against railbound Believe This Bob and newcomer Summer Camp, who spent the five previous starts in the Preferred at Woodbine Raceway in Canada.

Then on Tuesday evening at Rosecroft Raceway in Maryland, a pair of Open events on the latter half of the card should prove fast and formful.

In the $9000 Open 2 Handicap for older pacers, a field of six will look to secure their spot as the top pacer on the circuit and keep their hopes alive for a potential horse of the meet title. Both track management and members of the Mid-Atlantic Chapter of the United States Harness Writers Association select a different winner each meet. In fact, each of their fall selections, Lyons Meandragon (USHWA) and Hi Sir (track) will face one another again on Tuesday, although both appear on the outside looking in regarding the title chase right now.

Last week's winner, Manhattan Rusty N (Art Stafford, Jr.) overcame a first over journey and held safe Hi Sir for his third win in seven starts at the meet and his first score in the Open. This nine-year-old Artsplace gelding owned and trained by Gary Ewing of Ge's Romanero fame, has earned $14,400 in seven starts at the meet after failing to earn a dime in five tries at Dover Downs to start the campaign. He has already joined the short list of horse of the meet contenders.

Hot Art (Frank Milby) the beaten favorite last week after winning the April 14 edition of this event in wire-to-wire fashion, has captured the Open 2 three times in six starts at the meet and two of his setbacks occurred against Dover invader Fearless Diablo. A six-year-old Art Major gelding owned and trained by John Baxter, Hot Art has already earned $18,000 in six starts at the meet and is already among the short list of contenders for meet honors despite wilting as the 8-5 favorite in last week's feature.

Inside rivals Toms Titan (Jonathan Roberts), Lyons Meandragon (Roger Plante, Jr.) and Hi Sir (Russell Foster) have raced well at the meet but still need to improve. Hi Sir owns a win here in the Open 3, but has lost four straight at this level and could not overhaul Manhattan Rusty N despite an ideal, second over trip last week. Lyons Meandragon has won twice in seven starts, but both came against non-winners of $6000 last five starts company and he is winless in five starts in the top class. Toms Titan won two starts back against non-winners of $6100 last five starts company, but has not been a factor in the Open 2. Bad Man Sam makes his local debut for trainer Eric Ell after spending much of the campaign against $20,000 claimers at Dover Downs.

One race later in the $9000 Open 2 Handicap for trotters, Delaware invaders Prayer Session (Roberts) and Deacons Valley (Donnie Russell) will look to overcome their outside assignments. Of the two, Prayer Session should loom as the solid favorite. The six-year-old Like A Prayer gelding trained by Trish Foulk spent much of the Dover Downs meet in the upper level classes for trotters and boasts two wins against $25,000 claimers, while Deacons Valley makes his first start in three weeks.

Chinese Cuisine (John Duer), the current all-age track record holder for trotters, will look to regain his winning ways. The seven-year-old Revenue S gelding has won only once in 11 seasonal starts and has disappointed in two local tries with catch drivers, so Duer climbs back in the bike Tuesday. Celia Hall (Plante) has been a model of consistency in seven local outings, with one win, one second-place finish and a pair of third-place efforts. BWT Taj (Stafford) has been first and second in two local tries for trainer Arlene Cameron and owner Thomas Cooke.

A pair of horses in Tuesday's opener will look to keep their hopes alive for meet honors. Beammeupscottie (Daryl Bier) has wson three times in five starts at the meet for trainer Brian Callahan and owner Gloria Kinnamon, while Racin Best (Brian Burton) owns a solid 2-3-1 slate from seven local tries for trainer Philip Jasper. They will start from posts six and seven, respectively, on Tuesday in a field where Shady Breeze (Milby), KJ Ben (Stafford) and Dalhousie Dave (Kim Vincent) will garner more support.

Several races later in the third, a non-winners of $4500 last five starts class for trotters, Brilliance Hanover (Timmy Offutt) will look to remain on the short list of meet title contenders. This seven-year-old Sj's Caviar mare owned and trained by Gerald Kelly already boasts three wins in six starts at the meet, while finishing second twice in her three setbacks. She owns tactical speed and the ability to grind down her rivals first over, so Brilliance Hanover cannot be overlooked tonight or down the road.

Then in Tuesday's finale, Little Miss Woohoo (Bier) will look to maintain her winning ways and remain among the contenders for meet honors when she starts from post two in a non-winners of $6000 last five starts class. Trained by Clyde Oglesby, Jr. for the Denmar Stable, Little Miss Woohoo has already won three times in seven local outings and has feasted on conditioned foes to this point. She will garner plenty of support in Tuesday's finale and another win would keep her in the chase for meet honors.