AQHA champion Moonist will be in action Sunday evening at Los Alamitos  in trials for the $152,000 Vessels Maturity (G1).

Moonist, who runs for owner Ron Hartley and trainer John Cooper, has already won 23 of his 33 career starts  with earnings of $874,068.  The son of Separatist won the  Los Alamitos Winter Championship on Valentine's Day and toyed with his opposition in an allowance win on May 20,  Regular rider Cesar DeAlba will ride the multiple-graded stakes winner from post position five in the  first of the two trials. 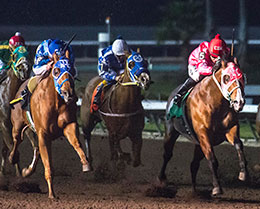 Moonist, one of the top Quarter Horses in North America, runs Sunday at Los Alamitos.

Moonist will not have an easy task as his competition includes graded stakes winners BF Farm Boss, Forget It and He Looks Hot, who won the 2014 Los Alamitos Two Million Futurity winner.

The second trial, to be run as the ninth race on the card, includes He is the Risingstar and Glock, from the barn of Paul Jones as well as Juan Aleman-trainee, Dutcher, who was the runner-up to He Looks Hot in the 2014 Los Alamitos Two Million.

Moonist and Zoomin Effortlessly, currently ranked as the top two older horses in the AQHA Weekly Poll, have already clinched berths to the prestigious $600,000 Champion of Champions (G1) at Los Alamitos in December.  The winner of the Champion of Champions will earn $300,000, as well as strong consideration for year-end championship award recognition.
Racing
Loading...