My favorite all time track!

When ask recently about which track I would select to be my favorite, I gave 5 or 6 answers. He said no, I could only pick one. Before I share with you what track I chose, I must say that I'm a big sports guy and when it's baseball season, baseball is my favorite sport. When it's football season, well you get where I'm going with this.

Since I'm going to limit myself to one track, my choice is Santa Anita. If you read my last article on my favorite jockeys, you probably would assume this since most of them are staples of the course.

Some facts about Santa Anita:

In February of 1935, the first Santa Anita Handicap was run. The purse was 100,000. It was the largest in the United States at that time, which is where the nickname "Big Cap" came from. Due to its close proximity to Los Angeles, it is often frequented by Hollywood movie stars, sports figures, and singers. Seabiscuit won his last start in the Santa Anita Handicap.

It was some 20 plus years ago that I discovered Santa Anita. I was just getting into horse racing, and the meet in California at the time was Del Mar. I completely fell in love with it. When the meet was drawing to an end, I was saddened and I didn't really care what Santa Anita was. I remember distinctly watching the first day of the meet and was blown away. A few races later, they ran down that glorious hill. That was all it took to put it over the top.

I have been to several tracks, but never Santa Anita. I guess it is one of those top bucket list things for me. I'm a Midwest boy, but I favor west coast racing.

I was going to give you my 5 favorite horses from Santa Anita, but instead I went to a good friend and more importantly a great guy, someone who has seen it all in horse racing. In my opinion and I’m sure several others, he is considered an expert on the bloodlines of a horse and he does it right off the top of his head in most cases. His daily writings are poetic and straight to the point!

His Name is Harry Watnik. I encourage all to look him up on facebook and read his daily insight. Here is his list of his top 5 horses to run at Santa Anita. Thanks Harry.

The five greatest runners I’ve seen in my lifetime at Santa Anita Park include Landaluce. She did not race many times but, she and Zenyatta are the greatest fillies I’ve seen out west. She was unbeaten and died very tragically after a mere 5 races from a series of infections. By Triple Crown champion Seattle Slew, I saw her win the Oak Leaf Stakes and she was a lass somewhat like Ruffian overwhelming her opponents with unbelievable bursts of speed. Her grim death is one of the worst episodes of modern racing history. 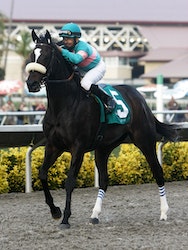 Zenyatta needs little introduction, only a nose kept her from being the “perfect” lady. Blame got her by a nostril in the Breeders’ Cup Classic, a race which will be long talked about whenever race people and sports fans gather to talk racing. I saw her 3 wins in the Clement Hirsch Stakes and, she was a tremendous presence standing near 17 hands with a powerful physique and bright and authoritative gleam in her eyes.

The greatest colt or gelding I ever watched at Santa Anita was Spectacular Bid, the son of Bold Bidder. Spectacular was easily the fastest horse at a distance I know of in the days since Secretariat was king of the breed. I recall the Bid’s great duel with all-heart Flying Paster, the win by Spectacular Bid in the Big Cap of 1980 is a sacred memory for me.

A very great horse, JO Tobin by Never Bend and ridden by Bill Shoemaker has the honor of running and winning the greatest race I ever saw out west, the Swaps Stakes of 1977 at Santa Anita. The victor of Seattle Slew won the Malibu Stakes, a handsome gifted winner on two continents JO Tobin represented all the excitement and unpredictable nature of racing.

Affirmed in 1978 was a blockbuster of a thoroughbred, graceful and fast all fighter and winner Affirmed was trained by Laz Barrera, the latter being among the all-time greatest trainers. Whenever Affirmed appeared on the west coast, it was always for the very best races like the Santa Anita Handicap which he won and the Santa Anita Derby. The latter was his stepping stone race to boost him to the three immortal defeats of his arch foe Alydar . Affirmed emerged from that profound task as the Triple Crown champion of 1978. A marvelous chestnut son of Exclusive Native, Affirmed rounds out my top five with aplomb!