Saturday, March 12, is the Santa Anita Handicap, one of my favorite events of the year. I love Santa Anita and this race has featured a who's who of handicap horses over the years. Seabiscuit, John Henry (twice), Spectacular Bid, Ack Ack, Alysheba, Free House, Game on Dude (3 times!), and of course last year Shared Belief. I thought it would be fun too look back at not only a couple of my favorites, but some of my friends' favorites as well. So I've included favorites from Frank Mirahmadi, Michael Wrona, Laffit Pincay III, and of course, Raider Mike of BARN Jury fame.

Before he won the BC Classic "For America" later that year, Tiznow turned in a scintillating performance (see what I did there Trevor fans) in the 2001 Big Cap.

I love this horse so much. He was so fun to watch. Here he is doing what he does best, destroying his rivals in the 2015 Big Cap.

"For the racecall, I love Trevor's call of Best Pal in his Big Cap win. As a race, the thrilling run between John Henry and Perrault."

"All time - I can't imagine how anybody could vote against Sea Biscuit's 1940 triumph, given his two previous exasperating losses and injury. His richly-deserved victory helped cement the Santa Anita Handicap's status, and must have been a joyous experience for the massive crowd. And, of course, it was the great horse's swan song."

"My time - Of the 25 renewals since I've been in the U.S., I would vote for 1999. The race featured two veterans of my favorite Triple Crown (1997) and, as we all lament, it is a rarity in the modern era to have even one star three-year-old racing at age 5. And, splitting Free House and Silver Charm at the finish of the '99 Big 'Cap was the ultra-talented but injury-plagued Event of the Year, who was favorite for the 1998 Kentucky Derby prior to being forced out of the race. Gary Stevens labeled the 1999 Santa Anita Handicap the strongest in the preceding 15 years" 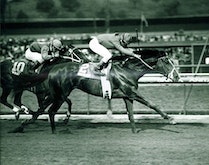 "1986 Greinton. Obvious, biased selection, but it was my father's was 5th & final big cap win. Terrific stretch duel w/ Rafael Meza & Herat. Herat was 1,000/1 & you could have fit him in your pocket. Tough as nails that day, always a thorn in the side of Precisionist...But not good enough to hold off Charlie Whittingham's Greinton or the pirate!!"

"2014 by a pole! Game on Dude beat Mucho Macho Man and Will Take Charge that day. Dude has the most Big Cap wins, fastest winning time, and biggest margin of win."