The One Thing California Chrome Won't Be Doing This Year

There's a lot of chatter on social media today about what happens with California Chrome after the Belmont in 19 days. 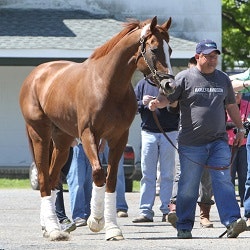 Again: without a crystal ball, I have no idea if he wins the Triple Crown or not. And given the choices his owners have made all the way along, it wouldn't surprise me if he continues racing whether he wins or loses the third jewel.

But there is one thing I know for absolute certainty: no way does California Chrome stand at stud this year.

For us to have little baby Chromies next year would break the basic tenets of breeding rules that have been in effect for generations.

This is why all horses on this side of the equator share a January 1 birthday v. their July 1 start to the calendar year.

For anyone who would make the Well If He Races On June 7 And They Ship Him Straight To The Farm, He'd Have A Month To Cover Mares argument... No. Just no.

No farm in their right mind - I don't care how hot the hype on a Triple Crown winner is - no farm is going to do that. Oh - and by the end of the breeding season - the only mares left to cover are usually not the ones with the blackest of type that a horse of Chrome's caliber deserves to get in his first book.

I was the tour director at Three Chimneys Farm when they got Smarty Jones back in the summer of 2004: their program saw a month or more for a horse to adjust to coming off the track, then another month learning how to be a proper stallion.

You can breed horses a lot of ways, but - more than any other discipline - the Jockey Club is explicitly clear on how we make Thoroughbred babies: everything is live cover. Meaning no artificial insemination. Every mare must be covered by the stallion. And not every stallion takes to mounting mares right away.

For anyone looking to make the International argument... Will a Cal-bred American Triple Crown winner really garner that much attention from overseas? I just don't see it. Sure the Japanese bought I'll Have Another, but he had more of a classically recognizable pedigree.

We actually have had a Triple Crown winner in North America recently: go back to 2003 Canadian Triple Crown winner Wando... he never quite got the respect he deserved and he was a good looking, well-bred horse with a fantastic race record (their Triple Crown is arguably tougher than ours: three races over three different surfaces at three different tracks). Despite standing most of his career at one of Kentucky's premier farms, he never quite caught on with breeders.

So as much as California Chrome likes to show off his - well - particle, there is simply no way he covers a single mare this year. I'm sure he'll throw an exceptionally beautiful foal... we just have to wait a bit longer to see them.

In the mean time, may I suggest ogling this adorable Frankel foal out of Musical Treat, making her a half to the extremely talented Finsceal Beo (thanks to @miriamanglin & @michellekinane): 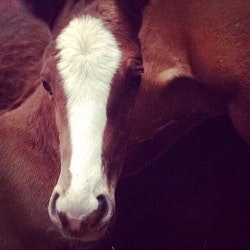