A Future Star You Need to Know

Just before the new year, a bay colt named Only I Know made a splashy debut at Mountaineer Park in Chester, West Virginia. Sent off at odds of 8-1, the son of Flower Alley broke well, quickly took the lead and pulled clear of his competition down the stretch. The eventual win margin was more than 12 lengths!

Trained by Debra Rombis and owned by Flying G Racing, Only I Know has special significance to BetAmerica players: a percentage of his ownership was the prize for a BetAmerica.com contest several months back.

The winner, Marvin Goeller, was so impressed with the colt that he actually topped up his ownership and he is joined in the Flying G partnership by fellow BetAmericans Steve Spencer and Troy Pople.

Bred by Three Chimneys Farm, where his sire stands at stud, Only I Know hails from a blue collar but talented family: his dam won three of her ten career starts and he’s a half to stakes winning sprinter Monono.

Flying G general manager Scott Bowerman explains, “I made a commitment to buy Only I Know right after I’ll Have Another won the Bob Lewis Stakes (February 2012). After talking with our people at Hubel Farm, we decided to go with the bay colt we nicknamed Norris.

“I paid $10,000 for him just before I’ll Have Another went on his Triple Crown run, (his half sister) Monono won the Orleans Stakes and their already proven half-brother Dave’s Pacemaker kept doing his thing. I’ll Have Another had us pretty excited!

“Norris has always been very classy, smart, big boned and happy. He surprised even us a little with the ease he won. The way he came back from that race like it was a work – I guess it was.”

The plan for Only I Know is to break his first-level Allowance condition in early February with a race at Charles Town. Should he prove to be just as prolific in his second start as his scintillating debut, he will then attempt the Triple Crown Trail for which he has been nominated.

Only I Know winning his debut by 12+ lengths

Flying G Racing, founded in 2010, is a group of fans and horseplayers who wanted to get more involved with the industry. They specialize in low budget horses that can race primarily at Mountaineer and they actively participate in the Raisers program for state-breds. Managing partners Scott Bowerman and Jake Silker are quick to point out their race record (all 7 yearling purchases have made it to the races and 6 are winners), as well as their commitment to providing a good quality of life for their runners once their on-track career is done. Find out more about Flying G at their website. 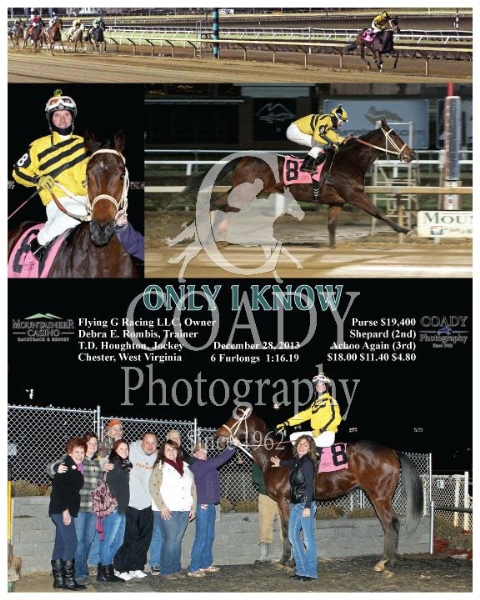