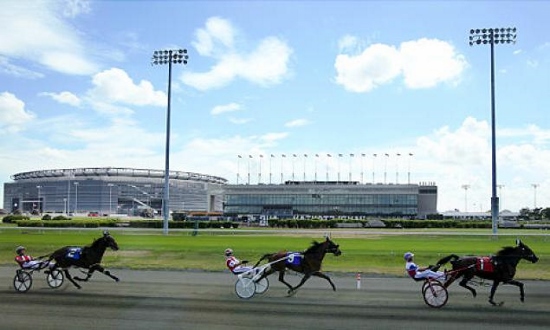 Horses that Packard selected at The Meadowlands in New Jersey and Northfield Park near Cleveland, Ohio, combined to pay $188.00 in win-place payouts for each $2 wager. He finished roughly $65 clear of the runner-up and also garnered bragging rights in the family. His twin brother, Adam Packard, finished third and sixth, respectively, with two separate entries and collected $1,250 for his handicapping efforts.

The added windfall could not have come at a better time for Packard, a Pittsburgh, PA resident who is a self-described "stay-at-home dad" with his son, who will turn two years old in January. His wife is expecting twins in June. Packard, 33, started the contest slowly when his first two selections did not finish first or second, but he got on the board in a big way when Celebrity Pegasus posted a 25-1 upset in a conditioned event for trotters at The Meadowlands.

"I had been watching him when he raced at Yonkers," Packard said. "So, with Yonkers closed now I thought he was worth a play at The Meadowlands. I was hoping that he could get there for me. He was last early and then he rallied late to win at a big price ($53.60). Right then I knew that I had a good chance to win the contest."

One race later at The Meadowlands, Alibi Seelster (Jim Marohn, Jr.) posted a 23-1 upset in a non-winners of $10,000 last five class for pacing fillies and mares and her performance added another $58.80 to Packard's bankroll. His total of $124.40 through that race would have been enough to win the contest even if none of his remaining picks would hit the board. But Packard was hardly through picking winners.

Two races later in the ninth at the Big M, Cash Me Out (Jonathan Roberts) scored a mild 5-1 upset in the $25,000 Open for trotters in 1:53.3 providing another winner for Packard. In the next race at the Big M, Packard's selection Let Her Rock prevailed and then You Rock My World also reached the wire first for the Pennsylvania resident in another 5-1 upset for conditioned trotters. He capped the contest by watching Flight Seelster (Jason Thompson) win an overnight race at Northfield Park as the 2-1 second choice.

"Mainly the key for me was looking for prices at The Meadowlands," Packard said. "I thought the Northfield card would be mostly favorites, so I focused most of my attention on The Meadowlands. I got off to a good start with Celebrity Pegasus and came back with Alibi Seelster. I was between her and
[Clear View Hanover] and they finished one-two and I also had the exacta that race."

Packard also owns 10 horses that primarily at The Meadows close to home and occasionally at Northfield Park, but he did have a trotter competing at The Meadowlands on Saturday night. Kiwi Pres, trained and driven by John Kakaley, father of catch-driver Matt Kakaley, finished second, beaten just a nose in the non-winners of $5,000 last five class for trotters as a dramatically overlooked 100-1 shot.