One of my favorite Tournaments of the year is on deck for our enjoyment, as the $20,000 Dick Andrews Futurity starts today at Palm Beach. 32 of South Florida’s top puppies will battle it out the next few weeks, with the Final being the day after Christmas December 26th.

Many good looking racers this Tournament has put together. Lets take a look at the field: 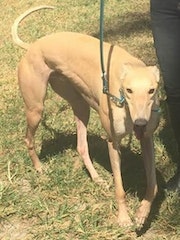 The fastest (29.36 secs) and most complete greyhound in my opinion of any racer entered. 7 wins in his first 10 starts is just impressive. Is this the next national superstar to come out of Palm Beach? 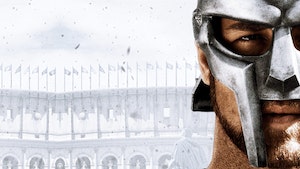 “The Gladiator” quickly moved up the Grade Ladder to start his career. Second fastest best overall split only behind Cruel Red. Good combo break and close. If he wins this, hopefully somebody from the Douglas Kennel will come out and say like the movie “Are you not entertained?”

Kinda Cruel’s Red brother has lit the track up since stepping on the scene last month. Fabulous box firing skills and great pedigree. Could we see a brothers Final match up with Red and Go Home? The Palm Beach fans I know would love to see it. Reminds me of two years ago when Storm Control went against brothers Ghost Buster & Juggernaut in the Puppy Stakes Finals.

AMF Sweet Glide ~ B & B Racing

The top puppy from the hottest Kennel at “The Beach” comes in as the most experienced racer here. Play this dog if she gets any inside hole during the Tournament because of her dominance on the rail.

Never count out the 11 time Kennel Champions in a Stakes Tourney.

Has A Grade experience and is always on the ticket. Owner Shannon Henry won this Tournament two years ago with JS SpeedyPebbles (pictured) 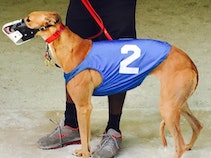 I’ve said this all along….Kinda Cruel Red is one of the top puppy prospects in the entire country. The last two winners of this Futurity (JS SpeedyPebbles & Loop A) went on to superstar status after they won. I think it’s Cruel Red’s turn to shine.

Here are some other picks from our friends at Palm Beach and around the country who cover the Track.

I’m going to have to go with the commander of the Armies of the North, General Felix Legions and loyal servant to the true emperor, Marcus Decimus! Love Gladiator.

I’m going with AMF Sweet Glide. One of the most experienced greyhounds in the field and proven winner.

You know I always say “Go Big or Go to the place where you live!

GoBigOrGo Home will always stick its neck out for you. He will also at the Futurity.