Which Palm Beach Final Is On Your Bucket List?

I will admit that I have never been to a Stakes Final at Palm Beach before (sad I know). Being an out of state writer reporting on greyhounds in paradise has its challenges and making it to one of the money maker races is one of them.  I was at the recent BetAmerica Daytona 550 National Championship, which was unbelievable.  But, it's not my home track.  To watch many of the best athletes in all of Florida battle in high drama contests at "The Beach" to me is the pinnacle.

So, if I am to pick just one to attend in the future, which one to go with?  What if you could just pick one in your lifetime to be at, which Final would be worth a long trip for a fan from far away to go to?

As we get ready for the St. Patrick's Invitational this Saturday, lets take a look at the major Stakes that happen throughout the year at Palm Beach and which is the most appealing to for the fans:

One of the best championships in the entire sport.  Many of the most famous sprinters in greyhound racing have won this, including recent All-Americans Rob Gronkowsi & Storm Control. When you live in a cold weather state, January is just brutal and a trip to South FLA is the perfect time of year to plan.

Many of the owners and kennels at this track keep their top sprinters here during this time of year simply because of this huge event.  Every year, you are going to see an amazing Tourney where the best settle the debate on the track to see who is supreme.

The most recent winner was Xtenshun, who became one of the longest shots to ever win a Title at 16-1 odds.

One of the most prestigious Tourneys in the world.  Since Palm Beach Kennel Club's birth in 1932, the Derby has run every year to see who can dominate in the 660 yard battlefield.  The most famous athlete ever to grace here Pat C Rendezvous has this course named after her and for good reason.  She set the all time win streak record in 1994 with 36 straight victories, which was one of my favorite memories I remember growing up following this track. She also won this Tourney that year.

This tournament is ultra competitive, with many owners around the country sending their top talent in to try and take this amazing Title.  Most often, this Tourney has many greyhounds in the hunt, with young up and comers going toe to toe with seasoned veterans. This can make for tough handicapping and wild finishes.  One of the most entertaining watches this entire season without a doubt. Plus you get a cool souvenir mug for attending.

Most recently was won by Ethel Is Here, whose record shattering runs have made her a legend around these parts. 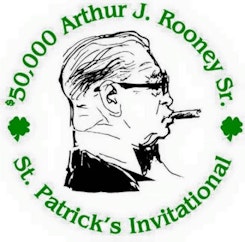 Being Irish myself, this race gets me all fired up.  Plus the logo for this Tournament of Arthur J Rooney Sr. is just a classic.

This Invitational is a one shot only deal, with the top 8 sprinters at the time of the race getting a chance to put it all on the line for one chance at glory on the Royal Palm Course. This is the final leg of the Big 3 Stakes at Palm Beach and is one of the most watched races in the sport.

This Stakes is the only one that seems to spur drama.  Each year a committee picks the Final 8 to represent their Teams in the final field.  The criteria seems to change every year, with Derby winners getting automatic bids some years and others not.  Also, this Invite seems to favor hot young puppies on recent win streaks over proven veterans.  Usually a Kennel only gets one representative in this race, even if there are two top quality hounds running for that team. Could change be on the horizon for this race in the future? Possibly a small Tournament instead of just one race for it all?  Who knows but the debate for this never stops.

This title was recently won by Storm Control and will be run for the 40th time this Saturday, March 12th.

These Stakes are for less money but are awesome to watch because of the young talent you get to witness.  All participants must be 2 years or younger in this Tourney, which makes for action packed races and unexpected twists & turns.  Many of the most famous greyhounds to ever run here have taken one of these Titles on the way to super stardom. Recent winners of these include Atascocita Clo, PJ St Pierre & Kay Beowulf.

The dates of these races are very appealing as well. The Bob Balfe starts shortly after the St Pats ends, which keeps the hype going for Stakes season.  The Gallagher/Kinnard is a sweet kickoff to Fall on Labor Day & the Futurity brings out the huge crowds the day after Christmas.  All 3 would be a blast to attend.

What could be better then hot dogs, beer & greyhound racing on this day? The feature mid summer stakes race is a one race deal that matches up the top sprinters against each other for the title.  Many of Palm Beach's elite talent is on break at this time, but many veterans and young pups are still around making this something to get jazzed about in the dog days of the season.

This race recently was won by PJ Timeless from Rader Racing.

All these Finals would be tremendous to see live.  Racing just has a different feel to it when a lot is on the line.

If I could only choose one Final to be at, I'd have to go with the Derby.  The history of it all and the longer distance just beams with excitement and is diffidently on my bucket list to attend.