One of the best things about the sport of greyhound racing is the fantastic names that are given to each athlete. Some are hilarious, others are clever and all have a great story behind them.

We've looked through all of the programs from this season that started July 1st and picked out our favorites this year. This list is just about names but having a strong racing game certainly doesn't hurt.

Here are the Top 10 racing names for this season at "The Beach."
#1 GV MooseIsLoose  ~ Douglas Kennel

You can't walk anywhere around South FLA right now and not at some point here a Mooooooooooose call.  The rookie sensation has a racing name that is impossible not to like and his game isn't too shabby either. The Moose has had no trouble getting loose all season long, as he is currently tied for the wins lead with 8 victories.
#2 WiggleIt Alilbit  ~ Brindle Kennel

Haven't we all wiggled something a little bit at one time or another?
#3 Go Big Or GoHome  ~ Janie Carroll Kennel

The name fits this racer perfectly.  If he's on, Go Big is one of the most dynamite racers at the track.  When's he's not, going home to practice his game is where he'll be.
#4 BetOn BetAmerica  ~ Royal Racing

The fastest billboard in history has made this company very proud over the last two seasons.  The star from San Francisco has super sprinted all the way to Grade A and is always willing to remind you that we are a great place to play.
#5 KicknKahunas  ~ B & B Racing

Has to be the most painful racing name out there.  Ask any dude if you need confirmation of why. This maiden is just starting off his career for the championship kennel from last season B & B Racing.

If you have a wild guess of where superstar owner Melissa Schmidt came up with this name, you are probably right.  Has a sibling named DropItLikeItzHot that confirmed my first guess.
#7 Johnny Souffle  ~ Rader Racing

Is named after future Marconi Award winner and host of The Backstretch Show on 95.9 FM The Palm Mike Balsamo. Balsamo came up with this radio name to promote area restaurants in South Florida using hysterical commercials. Johnny the greyhound has been solid this season, already up to Grade B currently.
#8 JS Sotally Tober  ~ Koppe, Staats & Collins Kennel

The creative genius that is owner Shannon Henry strikes again.  This is a greyhound name you probably shouldn't say when you are trying to convince a cop or others that you haven't been tipping them back.
#9 Big Red Dog  ~ Rader Racing

The most direct greyhound racing name ever.  He's big, he's red and yep he's a dog.  Also goes by the name "Clifford" which has been a smash hit with fans around the globe.  Cliff is currently the hands down favorite to take home the 20K Labor Day Puppy Stakes Final.
#10 PJ Smoke Em Out  ~ Agganis Kennel

"Smokey" does just that when he fires out of the starting box.  Amazingly is going on to his fourth racing season and can still hang with the best of them. 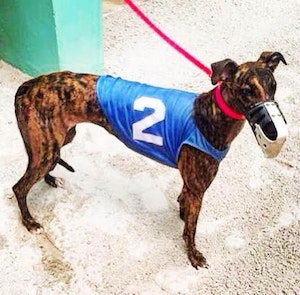