What an exciting month of racing just wrapped up here at Palm Beach! Along with the superstars continuing to shine and the youngsters showing their stuff in the Puppy Stakes Tournament, this place continues to be one of the top tracks in the country.

Here are the Top 10 greyhounds for August currently racing at “The Beach.”

-Up 2 spots from last month

6 race winning streak going in August. 70% winner this season and owns five of the top six times of any super sprinter. Like A Fox better come back soon or this racer may run away with the season wins title.

-29.45 secs best time “The Queen of Palm Beach” had an average month of racing which knocked her out of the top spot. The 60% career winner can win from any box and when she is on, is absolutely lethal. She is by far the most popular racer to follow for fans at Palm Beach. 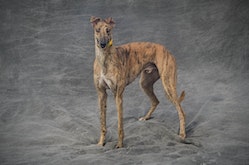 The rookie sensation reeled off 4 straight W’s in the Puppy Stakes Tourney before catching a bad break in the Final. This is a bonafide superstar, who could challenge for some major stakes titles this winter.

-Down 2 spots from last month

The season wins champ from last season is on a current rest. Has the best rivalry in the country going with Kennel mate Bae Sang. 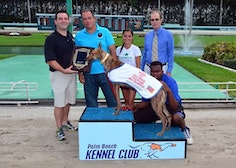 One of the most consistent racers here. Hasn’t finished out of the money since mid-April. On a current break and should return in October/November.

-First time this season in the Top 10

One hot racer since returning to Palm from an extended summer break. Four wins in five starts against some of the best talent here.

Has been a top Grade A competitor since the new season started. 7 wins already and can show a blazing rush. Champions Racing Team is sporting some of the top talent at Palm Beach this year.

In the most wide open distance at “The Beach,” all this racer did was run a perfect August by winning 5 straight. Look out for this greyhound as the season goes on.

What a rookie campaign the running back namesake has had. 6 wins already this season and bolted the second fastest time of the season in August (29.38 secs.) 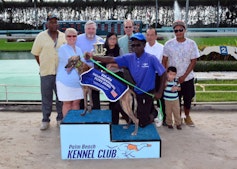 Pulled the shocker in the Final of the Puppy Stakes by upsetting two heavy favorites to take the title.  Has one of the best closes going at the track currently.