So many great stories as we head down the wire this season.  The Track Championship is totally up for grabs and top talent is starting to return to the track.

Here's our Top 10 Rankings for May at "The Beach."

All she needed was one race to convince me she's back to her winning ways.

After taking a well deserved 6 week vacation, Ethel immediately struck last Tuesday as she picked up her track leading 26th win.  If she is able to take the wins championship plus the Derby and track record she already has, this will go down as a season for the ages here.

The hottest prospect South Florida has right now.  Reeled off seven straight wins the last two months and is just blistering the Royal Palm Course with his speedy splits. Has a dynamite close but will need to break a bit better to continue his success into this summer.

Piled up 3 wins in May and briefly held a piece of the season wins lead.  "The Luck of the Irish" has consistently been in our Top 10 Rankings all year. Fantastic closer.

"Iron Mike" continues his strong rookie campaign.  The St Pats Champ has been solid all season long and is probably the most powerful sprinter at the track.

The "Mac Attack" just keeps getting better and better.  Tarmac caught fire in May, ripping off 3 straight victories to end the month. Awesome winning percentage at over 50%.

The two time defending wins champ is right in the thick of this years race as we head into the homestretch.  Even at 4 and a half years old, he can still fly with the best of them.

Put together a seven race winning streak in April and May.  Is absolutely the biggest flyer out of the box of any racer in South Florida. 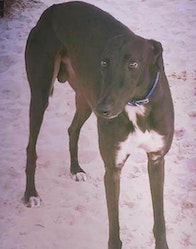 Really stepped his game up in May, including running the third fastest sprint time of any greyhound this season  (29.17)  Blu Too Kennel continues to impress.

The Puppy Stakes Finalist pulled the stunner on Memorial Day, upsetting the star laced field at 23-1 odds.  Will turn 2 years old this summer, which makes for a very promising future here at "The Beach."

The pride of owner Steve Schlachter is starting to find his groove late in the season on the "Rhonda Course." Pulled the upset over Ethel Is Here on 5/26.