Another week at Palm Beach and more history is made.  The track that continually pumps out story lines didn't disappoint, as we crowned another champion on Saturday and Kb's Like A Fox added another career milestone.

Here are the top stories from another fabulous week of racing at "The Beach."

In a year of surprises in Stakes races at Palm Beach, this championship lived up to the hype.  In a stunning victory, Flying Russian from the Rader Racing Team used the outside hole to his advantage and flew home for the 29.46 secs victory in the 50th Annual Bob Balfe Puppy Stakes finale. At 14-1 Odds, this certainly was something the betting public didn't expect. With Russian's victory & Xtenshun's 16-1 long shot win in the He's My Man Classic back in January, the underdog has never ruled quite like it has this year.

Rader Racing again pulled off the Puppy Stakes Triple Crown at Palm Beach, after winning the first two legs of it earlier this year.  This hadn't been done since 2007 by you probably guessed it....Rader Racing.

Owner Norm Rader was more then pleased with Russian's victory.

"Actually I was shocked," says Norm.  "When the 2 (Kinda Cruel Red) didn't break, that changed everything.  Then I saw the 7 (JS Insta Gator) get around clean, I thought he'd peel me.  Russian picked a good time to run his lifetime best race. The Spring Auction had just ended and the fruits of the last auction came through.  Yong (Head Trainer & Wife) is very happy."

What's next for the Finalists?  We know that Kinda Cruel Red is off to Wheeling Downs in West Virginia and that Rader Racing will more then likely send most or all of their three finalists to race at the top paying track in the country Southland Park in the near future.

I hope that the Blu Too Kennel keeps their top stars Tarmac (pictured) and brother Blu Too Ataree at "The Beach" because it would be quite fun to cover these two going into the summer months of racing. "The Little Kennel That Could" got a taste of their first Stakes Final here and can expect many more in the years to come.

Congratulations to Flying Russian and Team on winning the Puppy Stakes!

Replay of the Final:

Just like horse racing when the Triple Crown chase ends, some fans may feel that most of the excitement is over.  Greyhound fans of "The Beach" may be feeling the same way now that the major Stakes Tourneys are over for the season.

Good news fans is there is plenty of things to follow going forward.  The season wins championship looks like it may go down to the very last week in June just like last season.  There is also solid Feature Races that will be shown, including the Mother's Day showdown of the top female sprinters in South FLA and the top males squaring off on Father's Day.  Memorial Day on May 30th will also showcase Palm Beaches talent in the $5,000 Rooney's Beer Cup races.

On Tuesday, history was made once again as career wins leader super sprint legend Kb's Like A Fox flew into the record books with his 90th career victory.

Tell me if you heard this before folks..."The Fox" with that victory now has a share of the season wins lead with Derby Champ Ethel Is Here with 25 W's.  The two time Track Champion is trying to do the unthinkable by winning three championships in a row and has a great chance of doing it.  With Ethel resting and the super sprint lineups looking underwhelming, Fox could put this chase away in the coming months.

Track announcer Mike Jameson did promise to put Fox's Walk of Fame star in himself if Fox won his third straight championship.  We just might have to hold him to that.

The hottest racer at the track continues to be Derby Finalist Atascocita Camry from the Suncoast Racing Team. Camry used all that V6 power to thunder home her 5th straight victory Friday on the "Rhonda Course" in a time of 38.25 secs. 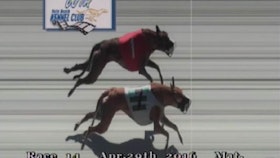 The win didn't come without drama though, as Camry held a gigantic lead early, only to see if evaporate at the wire as Kuhuna from the North Shore Kennel applied the pressure. As seen in the above photo, Camry held on by just 0.02 secs in what turned out to be an unexpected nail biter. We'll see if Camry can keep her streak going later on this week.

Check back next Sunday to see the top stories from the week of racing at greyhound racing's most popular track!

Also watch for our Palm Beach Top 10 Rankings for April to be released on Tuesday.  New champion Flying Russian will certainly be making his debut in the polls.