Happy Memorial Day Weekend Palm Beach fans!  Lets get into the top stories from this past week of fantastic racing action:

With "The Luck of The Irish" Barts Dublin from the Douglas Kennel winning on Wednesday, we now have a three way tie on the top of the standings. This is utter chaos people! Palm Beach does not have a tie breaker, so there is a solid chance we have more then one winner when the season wraps up June 30th. Certainly should be a ton of drama each time one of these racers gets the call.

There hasn't been a three way tie in this championship since 2005 when Kaycar Dorothy, Ozzie The Man  (pictured) & Shall We Sea all finished the season with 31 victories. Hopefully one of these greyhounds pulls away from the pack, but with how competitive this season has been, it wouldn't surprise me in the least if we have more then one champ.

Palm Beach does an outstanding job of putting together All-Star races for holiday cards and Monday's should be no different. The 12th Race should be one for the ages, as many of the top sprint stars in all of South Florida will compete for the Rooney's Veterans & Civilians Award Feature Title. St Pats Champ Superior Tyson (pictured), Barts Dublin, Go Big Or GoHome & recent Puppy Stakes Champ Flying Russian are all slated to start. A must watch race without question that may have huge implications on the Track Championship chase.

Along with the All-Star Feature, Palm Beach will be honoring the career of JS SpeedyPebbles from owner Shannon Henry after Race 6.  We just wrote a tribute article honoring "The Queen Of Palm Beach" if you'd like to catch yourself up on the outstanding career of Pebbles. 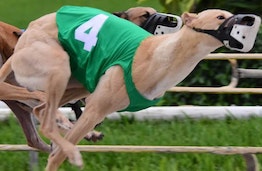 One of the hottest dogs in the game today Go Big Or GoHome from the Janie Carroll Kennel continued his dominance at "The Beach" in Thursday's Matinee finale by winning his 7th straight start in impressive fashion. "Bart" actually broke last around the turn but just whizzed by the other seven competitors on the backstretch to score a 29.69 secs victory. He'll have his biggest test of his career coming up tomorrow in the All-Star feature, but did draw the 8 box, which should be a huge benefit.  If the young superstar can go to the winners circle yet again against this top field, I will be extremely hopeful for a gigantic summer racing campaign for the pride of owner Monte Jacobs.

Omega Point
Omega Point from top kennel this season B & B Racing is quietly putting together a great month of racing on the "Rhonda Course." Omega was able to run down Derby Champ Ethel Is Here in Thursday's Matinee, scoring his second straight victory.  With Atascocita Camry, Ethel, Omega & recent returnee to Palm Beach Fraulein Morgan, the 660 yard competition is becoming quite fierce. Exciting!

That's all we have for this week. Look for our May Top 10 Rankings to come out next Friday. Who will be at the top of the poll?

We'll see you next week for the wrap-up!