Is it hot in here?

With the temps soaring in South Florida, the conditions are making for a sizzling track at Palm Beach.  Lets get into the top stories from the previous weeks action.

The pride of Ryan Racing, phenom Sentinel continued his torrid start to the new season by putting his game on display Friday afternoon.  The recent Firecracker 545 winner encountered a bit of trouble at the start but then used the after burners to fly away with the 29.83 secs victory, remaining perfect on the year.  He'll get his next start in Wednesday's 12th Race with the national media beginning to take notice of the young star.

Palm Beach got some good news this past week, as two of their top athletes made the recent United Greyhound Racing Top 25 National Poll (May-July 4th)  Recent Track Co-Champion Atascocita Camry from Suncoast Racing checked in at #12, while JustDoInMyThing from owner Monte Jacobs was ranked 17th.  Barts Dublin who scored 27 victories last season was an honorable mention.

This poll will become very significant in the next few months because of the huge implications on who runs in the National Championship in January.

Congrats to all teams and racers on this accomplishment!

What a difference a few weeks can make.  With the new year starting on July 1st, the top spots for all of the championship chases became a free for all.  Sentinel, Se's Cool Kate, and new rookie sensation GV MooseisLoose have started out strong on the Royal Palm Course, while Fraulein Morgan and Go Bon Kickstart have been the surprise dominators so far in the 660 yard competitions.

I know it's only been 3 weeks, but can you believe Ethel Is Here (pictured) or Camry haven't won a contest yet this season?  My moneys on this not keeping up for very long at all.  It will be interesting to see in the new campaign if either of these racers can relive their dynamite championship season of last.

11 time champ Rader Racing is also back on top, along with the red hot Douglas Kennel who steamrolled to 26 victories over the week with a ridiculous 24% overall winning percentage. That's getting it done.

Whose Your Top Puppies Going Into Labor Day?

Believe it or not, we've got stakes racing coming up in early August already.  Where is the summer going??  With the $20,000 Labor Day Puppy Stakes on the horizon, some contenders are starting to emerge that will begin to take the spotlight once the Tourney begins.  All Palm Beach home greyhounds that were born 8/1/14 or later are eligible for this month long party.

Big Red Dog from Rader Racing has been solid, posting three Grade A victories in his last five starts against solid fields.

I've also been wildly impressed with the speed of Whirlin Toudlelu (great name) from the Douglas Kennel.  She burned up the stopwatch by posting consecutive 29.23 secs victories, which immediately raises your eyebrows. 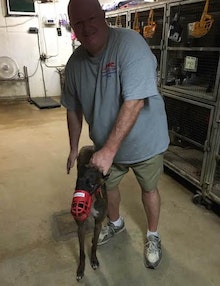 Of course us radio dudes on The Backstretch Show are rooting for host Mike Balsamo's namesake Johnny Souffle from Rader Racing to run well heading into this competition.