*JustDoInMyThing Winning By A Country Mile*

Another solid week of action at Palm Beach filled with dynamite performances from the top hounds in South Florida.  Plus a new way that pictures will be taken at the track and a youngster who is already turning heads this season.

Here are the top stories from this past week at "The Beach."

Ethel Begins The Defense Of Her Crown

The fan base just gets a little more jazzed up when she is running well.

Ethel Is Here from the Janie Carroll Kennel picked up her first win of the season in Tuesday's Matinee, going box to wire in true Ethel fashion.  The 37.87 secs W was her first since that epic victory to clinch a share of the Track Championship back on June 30th, which probably has felt like an eternity to her growing global fan base.

Winning the championship was tough last year, but repeating will be even more of a challenge.  Ethel got the first one and should be right near the top of our rankings all season long as she tries to bring home more hardware.

Ethel has gotten so popular that her team has decided to make t-shirts of her that will benefit a greyhound organization of their choice.  Look for details about this on our FB/Twitter feeds in the coming weeks if you are interested.

The Palm Beach Kennel Club has always been at the forefront in promoting their stars, but they are taking it to the next level with new technology they have recently purchased.

On Wednesday, workers started to install a new 360 degree camera that will give fans of the track a totally different perspective of races.  The aerial camera will show sides of the track and athletes that will be the first of its kind in our sport. The camera was positioned with a line that runs from the tote board to the announcers booth above the track. Video of the installation looks as though a UFO had made in appearance in Palm County, but friends at the track reassured us all it was just the camera. Whew!

Unheard of in the industry until now, these pictures should debut in the very near future and should be a game changer.

JustDoInMyThing from owner Monte Jacobs continued to make the stop watch hurt this week, as on Wednesday he flew out of the outside 8 hole and coasted to an eye popping 29.16 secs win. Since transferring from Hollywood a few months back, "Bubba" as his friends call him has now won 11 of 14 starts for an amazing 78% win percentage.  Many think this big guy is the best at the track right now and he very well could be.

Fans can get the chance to watch another possible scorching performance in Monday's 15th Race, as JustDoInMyThing gets the 1 box to fire from.  A must watch superstar every time he starts. 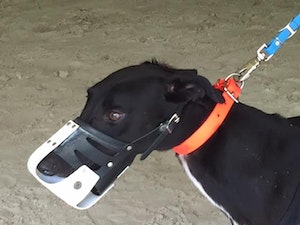 There's A Moose On The Loose!

Out of nowhere, your surprise early wins leader is a young up and comer named GV MooseIsLoose from the Douglas Kennel. Moose won his 6th consecutive start on Sunday, remaining one of the lone greyhounds to still be unbeaten since the racing calendar flipped.  With only his 2nd birthday coming up this Thursday, this is a puppy that looks like it wants to be a force here for a very long time.

If he continues to win, I'll be the first in line to start the Mooooooooose chants.

Has it really been a year?  Last July 24th, 2015 the unthinkable happened as two track records went down.  Speeding Bullet broke the sprint record with a 28.92 secs romp in the Matinee, while Atascocita Jolie from Suncoast Kennel blistered the Marathon Course in 41.23 secs. The first time in the 83 years of this track had two records been smashed in the same day, which still has me shaking my head how it all happened.

Certainly a day I will never forget and a day that may truly never be topped at Palm Beach. 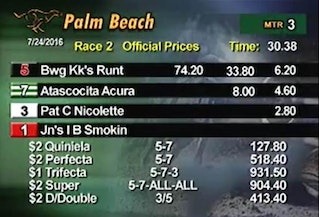 Did you have it?

Once in a great while at "The Beach" a ridiculously huge price will be available on a longshot.  Even rarer is when that presumed castoff actually wins. That happened on Sunday as BWG Kk's Runt defied the players logic, winning at 36-1 odds, lighting up the tote board for all successful wagers. Just take a look at the prices on all plays from this race and realize these kind of payoffs are very uncommon. Hope you were one of the lucky ones!