*All Time Palm Beach Wins Leader Kb's Like A Fox*

Happy 4th of July everybody!  As we get ready to celebrate our nations birthday tomorrow, we have at BetAmerica been celebrating all the accomplishments and incredible stories we saw last season at Palm Beach.  From records being broken, to superstars retiring and first time championship winners, we really did see it all.

In a season like we were seeing, it was only fitting that the championship chase came right down to the very last race on the last day of the season.

Ethel Is Here from the Janie Carroll Kennel further cemented her status as a future All-American by winning the season finale on Wednesday.  Along with the Derby Championship & middle distance course record she set, this Track Championship was just the cherry on top of what was a fabulous campaign. 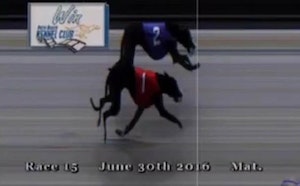 Not only did Ethel win the season finale, she did it in true Ethel style by making it as dramatic as possible when she needed it most. Down by a few lengths the entire race Wednesday to upstart rookie Go Bon Kickstart, Ethel put on a furious last ditch effort to clip Kickstart by 0.02 secs for the championship.  Many people at the track stated that they had seen nothing like this on the last day of the season ever that they could remember.

Ethel will forever share this Track Championship with 660 yard rival Atascocita Camry from Suncoast Racing.  The box burner concluded her season by winning 4 straight starts and ending a furious run which saw her compete in two major Stakes Finals and run toe to toe with Ethel every start they matched up. The rivalry with Ethel is real and is one story that is a must follow going into the new meet. Congrats to Janie Carroll's Team and Suncoast for the accomplishment both of their stars achieved this season.

B & B Racing Wins Their First Kennel Championship

Not to be forgotten in all the championship chases was the dominating season that B & B Racing had, cruising to their first Kennel Championship ever here.  With 905 victories, B & B easily coasted home for the title, led by St Pats champ Superior Tyson.  Things started to all come together for this team two years ago when All-American Storm Control put their squad in the spotlight and they haven't looked back since.  Congrats to B & B and their entire staff for a title run that was well deserved.

With B & B Racing taking the Kennel Championship this past season, the 11 year run of titles by Rader Racing came to an end as they finished 4th.  All streaks like this have to stop sometime, but many fans including me weren't sure that Rader would ever lose with how many superstars they had come through their Kennel this past decade.  From Rob Gronkowski (pictured) KB's Like A Fox, Bae Sang, Rck Conk Gonk, Craigie Renegade, O Ya Pure Country and Switzler Jammin just to name a few, this was one team that knows how to win and what it takes to be elite.

Even though they didn't win the Kennel Championship, Rader did pull off the Triple Crown of Puppy Stakes Titles by winning the Spring Stakes, Labor Day and Futurity championships all in the same season. No easy feat by any stretch.

Congrats to Norm Rader and head trainer and wife Yong Rader on one historic run that may never be topped. 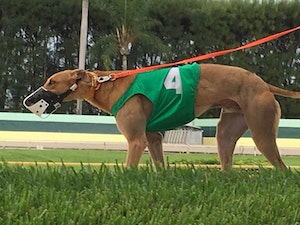 Clifford Is Bigger Then Ever

Speaking of Rader Racing, they have one of the biggest puppy prospects in all of South FLA currently.  Big Red Dog aka Clifford shot right up the Grade Ladder at the end of last season and continued that success right into this one by winning his second straight Grade A contest on Saturday.  This has to be the favorite in the upcoming Labor Day Puppy Stakes in August and a hound to watch out for all season long.

Rader Racing also told us this past weekend that they have no plans to move Cliff to any other track this season, which will give the fans something to cheer for all year long at Palm Beach.

Come on out to the Palm Beach Kennel Club on Independence Day for what should be one tremendous outing at the track.

After Race 8, Kb's Like A Fox will be honored for his career in a retirement ceremony to celebrate the accomplishments of the greatest super sprinter of all time. The all time wins leader at "The Beach" with 90 victories was a force to be reckoned with in an incredible four different racing seasons.

The fireworks really get going in Race 10, as the annual Firecracker 545 gets set with many of Palm' biggest sprint stars putting it all on the line in the premiere beginning of the season showdown.  JustDoInMyThing (pictured) from the Janie Carroll Kennel will go for his 10th win in 11 starts but will be matched up with heavy greyhound artillery, including National Championship Finalist Pat C Short Cut. 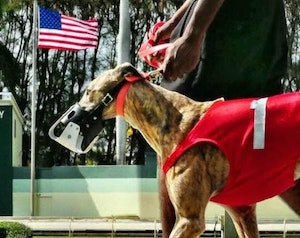 BetAmerica will have a $1000 handicapping contest to enter for the Matinee card but hurry if you want to enter.  Only a few spots remain left if you want in on the holiday action.

That's all we have for this week.  Enjoy your holiday weekend and we'll see you next time for the Wrap-Up!