Saturday afternoon Parx will host a pair of Grade I events for three-year-olds and both six-figure events will have an impact on divisional honors and potentially horse of the year.

In the $1 million Cotillion for three-year-old fillies, the unbeaten Songbird looms as the 1-5 choice under Mike Smith and the Jerry Hollendorfer trainee is among the contenders for horse of the year, especially if she remains unbeaten and caps her sophomore campaign with a win in the Breeders Cup Distaff. 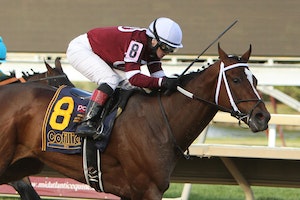 But if there was a spot to play against Songbird the Cotillion is the race. Maryland-need Cathryn Sophia arrives off a sharp score over the track and the Kentucky Oaks heroine looms a serious threat to Songbird and is worth an upset play at 3-1 or more.

One race later in the $1.25 million Pennsylvania Derby, Kentucky Derby hero Nyquist will face Preakness and Haskell winner Exaggerator and both will be vying for favoritism.