While many Americans will be on the highways on Wednesday afternoon and evening attempting to get to their various destinations for Thanksgiving Day and the weekend that follows, thoroughbred racing fans will focus their attention on the first four races at Penn National tomorrow evening when the track offers a trio of stakes that should prove appetizing.

Wednesday's third race is the latest edition of the $75,000 Blue Mountain Juvenile Fillies for Pennsylvania-bred two-year-old fillies and the race features a standout. La Vitesse, a freshman daughter of Weigelia out of a Gentlemen (ARG) mare, La Vitesse has won her last two starts in sharp fashion. She romped home 14 lengths clear in a allowance/optional claiming race at Parx earlier this month after garnering her diploma against maiden special weight foes at Los Alamitos.

But La Vitesse is not the only two-time winner in the race and those looking to play against her will have several options. Item has won both of her starts, including the Maryland Million Lassie last out last month only two weeks after prevailing in her career debut against maiden special weight foes over the Penn National strip. Stablemate Ianthe rebounded from a third-place finish in her career debut here to trounce maiden special weight foes by 11 lengths in her most recent outing on Sep. 22.

Five of the other starters broke their maiden in their most recent outing, including Peach Alley, a daughter of Jump Start who prevailed by eight lengths in 1:05.19 in a split maiden special weight event here on the same night that stablemate Polarized won the other half of the split event in 1:06.37. Rose Tree defeated maiden special weight foes by nine lengths in her career debut last month for trainer Jonathan Shepperd, while Pistol Andie was a distant third behind La Vitesse last out and Spanker has been second twice in three winless starts thus far.

One race later in the $100,000 Swatara Stakes for older horses, West Virginia-bred champion Charitable Annuity drew the rail for trainer James W. Casey and owner Mark Russell of Russell Road fame. Two spots to his outside is Fabulous Kid, a five-year-old son of Congrats out of a Lemon Drop Kid mare trained by David Jacobson , while the outside stall belongs to Res Judicata, a six-year-old Pennsylvania-bred gelded son of Smarty Jones trained by John Servis, who conditioned the sire to Kentucky Derby and Preakness Stakes success. 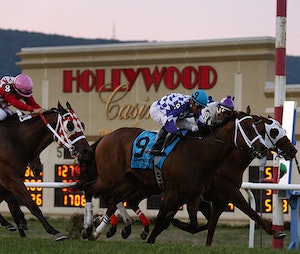 Then one race later on the card, Penn National will host the fifth running of the $200,000 Fabulous Strike Handicap for older sprinters. Much like the Grade III, $250,000 Frank DeFrancis Memorial Dash contested last Saturday afternoon at Laurel Park, the Fabulous Strike is perhaps too early on the calendar now to attract any horses that might have competed in the Breeders Cup Sprint, but several of its starters opted for this spot rather than the DeFrancis.

Weekend Hideaway looms the 2-1 favorite in this spot following his second-place finish as the 2-5 choice in the $150,000 Hudson Stakes for New York-breds at Belmont Park on Oct. 22. One start earlier the Philip Serpe trainee finished a solid third in the Grade I, $350,000 Vosburgh Invitational at Belmont. The six-year-old Speightstown stallion has won three of six starts this year and banked just over $300,000 and brings a solid 11-5-5 slate and $872,500 bankroll into this event which means a first-place check would leave him less than $10,000 shy of reaching the $1 million plateau in his career.

Several spots to his outside is Trouble Kid, a talented four-year-old Harlan's Holiday gelding trained by Ramon Preciado who arrives off an 11-length victory against allowance foes at Parx. But big victories at Parx is nothing new for this speedball, although duplicating those efforts elsewhere has often proven difficult. He finished third behind Chief Istan and Final Prospect in his last venture outside of Parx when facing allowance foes at Delaware Park. The outside stall helps his chances, but he still needs o display that he can carry his ability somewhere outside of Parx.

Other serious contenders in the Fabulous Strike include Chublicious, who has won three of four starts and banked $130,000 this year and sports an 8-2-2 slate and $300,000 bankroll from 16 career tries for trainer Claudio Gonzalez. Candip finished third behind Ivan Fallunovalot at Remington Park last out, but the winner came right back to capture the DeFrancis Dash impressively. Chief Lion was the beaten favorite in the allowance race at Parx that Trouble Kid won easily, Easy To Say has won three of seven starts for trainer Jason Servis, while Awesome Speed won his first four races but arrives seeking to end a four-race skid for trainer Alan Goldberg.
Racing
Loading...