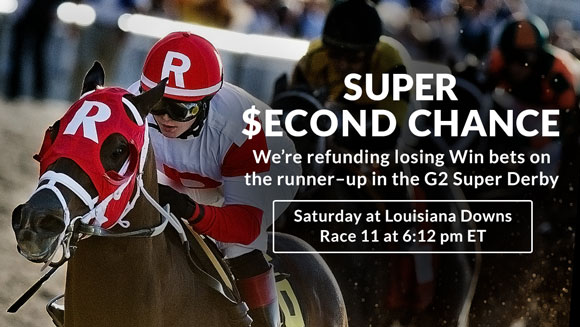 1-Jessica's Star: Never been worse than second, bred to run all day & comes in fresh for a hot Stidham barn.
[3-1] 2-Louies Flower: The chestnut's best races have come at 1 mi. or less & tactics-wise, he needs to be up closer to the pace. [30-1] 3-Ide Be Cool: Louisiana-bred speedster lost for the first time last out in his first time v. open company. [15-1] 4-Vicar's In Trouble: If you cross out the rail-drawn Derby effort, this speedy son of Into Mischief hasn't done much wrong. [9-5] 5-Louisiana Flyboy: Closer is in off back-to-back confidence wins vs. restricted company & several from last have come back to win. [10-1] 6-Victory Not Defeat: Nicely-bred colt has a good closing kick & gets even more ground + Prado back up. [8-1] 7-Alamo Heights: Versatile & always around at the wire no matter the surface or distance. [12-1] 8-Gold Appointment: Dark bay gelding has plenty of speed and a lot of heart, but will it be enough to stick around til the wire? [20-1] 9-Declan's Fast Cat: Took a while to figure out the whole Winning thing, but hasn't done much wrong since. [30-1] 10-East Hall: Took the Ohio Derby last out after spring of failed Triple Crown Trail attempts. [5-1] 11-Announcement: Can't have a better record than Undefeated & this WinStar homebred gets a jock upgrade to boot. [12-1]

The early attention has gone to Vicar's in Trouble and Jessica's Star: rightly so, as they're the only graded stakes winners in the field. Have to appreciate that the latter gets an upgrade to jockey James Graham and that the talented Rosie Napravnik comes in to keep the mount on 'Vicar.

East Hall is being mentioned as well: I understand that he ran a big race in the Gulfstream Park Derby back in January, but then he spent a few failed months chasing Derby dreams before finally finding the winner's circle again in the Ohio Derby last out.

One thing to look for in a race like this is the live longshots. Ide Be Cool intrigues me since he's got the speed to go early and has shown the ability to fight back when asked late in the lane; Louisiana Flyboy should be able to get the distance and he's been a different horse since the spring freshening; Declan's Fast Cat is a half-brother to the awesome sprinter Force Freeze and - if he can handle the step up in company - could be an exotics play in his first try past a sprint; and watch out for Announcement: Kellyn Gorder is a smart horseman and gave the son of Tiznow plenty of time to mature, which is why the bay is undefeated.