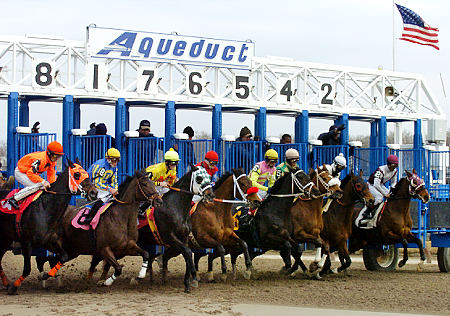 The feature at the Big A on Saturday is the Grade 1 Wood Memorial. El Kabeir takes on Daredevil and Frosted in one of the top Kentucky Derby Preps of the year. But the race right after, the Carter Handicap, is the one that could produce an overlay winner. Keep reading to see who should come out on top in the competitive Carter on April 4.

5-Palace - 5/1 - The morning line sure is juicy on a horse that won 2 Grade 1 races, finished third in another Grade 1, and won a Grade 2 in 6 races in 2014. Palace is also 3 for 3 at Aqueduct. Trainer Linda Rice appears to have the son of City Zip ready for a winning run in his 2015 bow. Not only is Rice winning 32% of her graded races this year, but Palace's best performance occurred off of a layoff in the G2 True North Handicap at Belmont in 2014. The works have been good coming up to this. Throw out the bad run in the BC Sprint since Palace found himself in all kinds of trouble. The front runners will be dueling in this, which should give jockey Cornelio Velasquez plenty of pace to chase.

2 - Clearly Now - 4/1 - Clearly Now is just a tough horse to figure out. At times, it looks like the winner of close to $890K is the best sprinter in the nation. He obliterated Palace and Salutos Amigos in the Grade 3 Belmont Sprint by 6 1/4 lengths last July. Then, sometimes, he looks like he couldn't beat $62.5K optional claimers like when he lost by 12 lengths in the Forego last August to Palace, Big Business and Vyjack. Which Clearly Now will show up on Saturday? The good one should since trainer Brian Lynch gets Joel Rosario to ride and the pace should be swift enough for Joel to utilize Clearly Now's excellent closing kick.

7-Wild Dude - 3/1 - I've got much respect for the second choice on the morning line but the horses that Wild Dude has been facing on the West Coast don't compare to Palace, The Big Beast and Clearly Now. He beat Conquest Two Step and Kobe's Back in his last by 3/4 lengths in the Grade 2 San Carlos. It's tough to see how that victory will translate into a win against these in the Carter. One thing to note, and it means something, is that Jerry Hollendorfer not only trains this horse but he owns this horse as well. If Hollendorfer is willing to put up the money to enter and ship Wild Dude all the way to New York, horseplayers have to believe that he's got a shot, right? His style fits perfectly with how the race is likely to be run.

3-The Big Beast - 5/2 - Much is expected from this Anthony Dutrow trainee that enters the Carter with a 4 race win streak. The Big Beast looked like what his name says he is when winning the Grade 1 King's Bishop at Saratoga in August. A victory in an allowance at Oaklwan served as the tightener for this. He's good, no doubt. Javier Castellano riding will only help, but how much did he really beat in the King's Bishop? Not only that, but Palace, Clearly Now and Wild Dude should offer better odds. If you think he's that much better than those 3, then by all means put him on top.