While there are two short morning-line contenders, this race can be quite profitable by bettors at all levels. 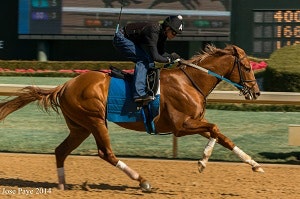 Coming into the last prep race for the Arkansas Derby next month, the horse in The Rebel that has the fewest question marks has to be Tapiture.  The chestnut colt by Tapit out of Free Spin has the pedigree to be a serious Kentucky Derby contender.  He is looking for his third consecutive win, and has already run three two-turn races in his five career starts.  This will be his third straight race at this distance, and fourth overall (won the last two at 1-1/16 mile, and showed in the G3 Iroquois at Churchill Downs last year).  In his last start 26 days ago, Tapiture bested eleven other starters in the G3 Southwest Stakes here at Oaklawn.  His last workout on March 10 was nothing spectacular, but on March 2 had a very strong five furlong workout between races at Oaklawn.  His only question mark is how he would handle an off-track.  He is the best choice to bet on top in exotics and horizontal bets.

Another Rebel starter with a solid Kentucky Derby pedigree is Ride On Curlin.  Facing both Tapiture and Strong Mandate (#4, 2-1 m/l today) in the Southwest, his outside post hurt him.  He ran very wide but still managed to finish third.  He has hit the board six times in seven career starts, with the only time finishing fourth--one behind Tapiture in the Iroquois last year.  Kent Desormeaux takes the reins from Calvin Borel, who will be riding the #7 horse, Street Strategy (8-1 m/l).  A better post, this being his third start off the layoff, and the prospects of getting an all-around better trip should equal Ride On Curlin to catch a piece of The Rebel.  Bet him to win and place, for a price.

OTHERS TO CONSIDER: 5-Hoppertunity & 4-Strong Mandate

Hoppertunity did not race as a 2-year old.  He finished 4th in the G2 Risen Star at the same distance at Fairgrounds last out, and will have Mike Smith up for Bob Baffert (who excels in stakes races at Oaklawn).  At 10-1 m/l, he brings some value to the table.  Strong Mandate will be a short price, but this is his second race off the layoff, and was the beaten favorite in the Southwest.  Include him on top of exotics and in multi-race bets.  He will also be a top play if there is rain and an off-track at Oaklawn.