Kobe's Back vs Ferocious vs Chelios 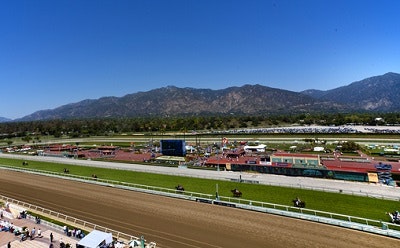 1-Ferocious: a head away from being undefeated 2-Tonito M.: well regarded South American import for 'Dorfer 3-Kobe's Back: well-traveled sprinter deserves a clean trip 4-Chelios: Stevens is back up for 2nd back off the freshening 5-Twenty Percent: steps up after breaking his maiden impressively 6-Puppy Manners: precocious colt making his 11th start already 7-Top Fortitude: well-bred colt gets Stra back up for 2nd try v. winners

What an interesting race we have on our hands here... half the field is sitting at under 3/1 on the morning line and another two are at 6-1. I'm curious to see what the public makes of this group once wagering opens on Saturday.

Let's start with the favorites: Kobe's Back has certainly made the rounds this year with starts at Santa Anita, a forgettable Oaklawn trip, and a decent effort at Aqueduct last out. Glad to see them keeping him at what he obviously does best: sprinting.

Behind him (and likely to be very short prices) are Ferocious and Chelios: both are all-but undefeated in their short three-race careers. The former has rolled off back-to-back wins after a near-miss debut; the latter gets Gary Stevens back up after apprentice Van Dyke nearly got the job done off the freshening last out.

In terms of "longshots," you can bet the price on Tonito M. will be anything but 6-1 come post time. This highly regarded Kentucky-bred son of Rock Hard Ten moves to the Hollendorfer barn having had a phenomenal career in Puerto Rico. Also well-meant are Twenty Percent (co-star of BetAmerica's TV commercial and in off the big debut win) and the well-bred Top Fortitude who deserves a second look second time v. winners.

And just because it's racing luck and 'Dorfer and if I don't mention him, he's likely to win by a Secretariat-esque margin... the longest shot on the board is going to be Puppy Manners.