Due to inclement weather, the Grade 3 Southwest Stakes was moved from Feb. 16 to Feb 22. The race figures to be more competitive than the Fountain of Youth, where Upstart was taken down and Itsaknockout awarded with the win, or the Risen Star Stakes where International Star won and paid $9.60. Mr. Z is the second choice at 3/1. Is a repeat of the Smarty Jones, where Mr. Z veered out as the $1.10 to $1 favorite, in the cards? 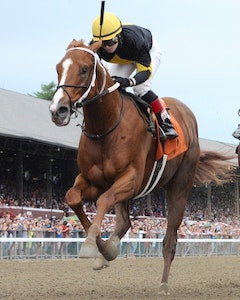 5-Bold Conquest – 10/1 – Horseplayers have to love the morning line assigned to this son of Curlin that hasn’t been seen since finishing third in the Grade 1 Breeder’s Futurity at Keeneland on Oct. 4. Bold Conquest is trained by Steve Asmussen, the man who conditioned Curlin to victories in the Arkansas Derby, Preakness Stakes, and Breeders Cup Classic in 2007. Bold Conquest will need to move forward from his last in order to win. Based on his works, that move forward may be forthcoming. The colt busted a 5 furlong work in 1:00.2 on January 30. Then, on Feb. 5, Asmussen worked Bold Conquest 5 furlongs in a blistering 59.3. Assmusen added a 4 furlong maintenance move on Feb. 12. The fast works are a sign that Asmussen is looking to put more speed into the closer. Bold Conquest should be right there at the end, making the colt an attractive overlay at the morning line odds. 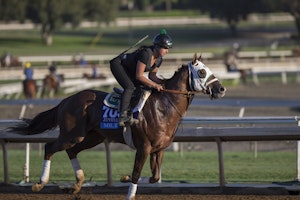 11-Mr. Z- 3/1 – Sure, he veered out and lost all chance at the victory in the Smarty Jones, but trainer D. Wayne Lukas is a master at developing three-year-olds. One of the ways to fix Mr. Z’s incredible lack of racing discipline is to put a more seasoned jockey on his back. Lukas is doing that by flying in California rider Corey Nakatani, one of the most under rated riders in the nation. Nakatani has the strength to keep Mr. Z’s mind on racing. He’ll also be patient enough to move the likely chalk once the gates open at the exact right time and there is no question that this Zayat Stable’s owned three-year-old sired by Malibu Moon is talented enough to win this.

6-Far Right – 5/2 – Ron Moquett trains the winner of the Smarty Jones Stakes who also finished third in the Grade 3 Delta Downs Jackpot in November. Far Right made a great move at the second call to get within 2.75 lengths at the top of the stretch. Jockey Mike Smith pushed the button and the Notional colt, purchased for only $2,500, exploded to win going away by 1.75 lengths. The move was impressive, but Mr. Z’s issues definitely flattered it and there’s no doubt that Far Right will be over bet in this situation. Use underneath unless Mr. Z is bet down to nothing again and for some reason the money goes to Bold Conquest.