Many thanks to the good people at Fort Erie for the following preview...

At a distance of 1 3/16-miles, the Prince of Wales is the only race in the Canadian Triple Crown Series that is run on a traditional dirt surface. The Queen's Plate, a 1 1/4-mile 'Poly' test is the first jewel of the Triple Crown which is completed by the Breeders' Stakes, a 1 1/2-mile endurance test over Woodbine's E.P. Taylor Turf Course, to be held on Sunday, August 17.

Trained by Josie Carroll for owner-breeder Ivan Dalos, Ami's Holiday will be making his first start on the dirt. Luis Contreras retains the mount on the Harlan's Holiday-Victorious Ami colt who boasts a record of 2-2-1 from seven starts including a major score in the Grade 3 Grey Stakes in October.

"He always breaks sharp and settles into a good position early," said Contreras. "We'll try to find our spot and hope for a clean trip."

Ami's Holiday, who traveled down to Fort Erie to gallop over the surface last weekend, breezed five furlongs in 1:01 over Woodbine's main track on Wednesday in his final prep for the Prince of Wales.

"He's been doing everything right," said Contreras. "His fitness is excellent, he's confident and I'm looking forward to the race. We'll see how he handles the dirt, but he has raced behind horses on the 'Poly' so I don't think he will mind having a bit of dirt in his face."

Matador, trained by Plate-winning trainer Mark Casse for John Oxley, has been installed as the 3-1 second choice. The bay son of Malibu Moon-I'm Breathtaking took part in a series of U.S. Triple Crown prep races over the winter finishing fourth in the G3 Sam F. Davis; fifth in the G2 Tampa Bay Derby; and sixth in the G1 Florida Derby.

On his return to Woodbine, Matador romped a 1 1/16-miles allowance route by six lengths, setting up an even seventh-place run in the Queen's Plate. Patrick Husbands, who guided Lexie Lou to victory in the Plate, will take over from Julien Leparoux aboard Matador.

Coltimus Prime (12-1, Post 6), trained by Fort Erie local Justin Nixon, will garner support from the home crowd. The dark bay son of Milwaukee Brew-Certainly Special, with a lifetime record of 2-2-0 from eight starts, finished ninth in the Queen's Plate.

"This is where I learned the game," said Nixon over the phone from the border oval. "It's such a nice atmosphere down here. The facilities are excellent and the horses are enjoying the experience. We're happy to be here to support Fort Erie and Ontario horse racing."

Coltimus Prime was forwardly placed in the Queen’s Plate through a swift three-quarters in 1:11.2 before fading.

“We drew inside and wanted to be forward in the Plate and it might have been a little quicker than we would have liked, but that's racing,” said Nixon.

The dark bay colt, who can be found on Twitter at @ColtimusPrime, breezed between races on Tuesday evening’s card at Fort Erie with Francine Villeneuve aboard, clocked in a good :59.20.

“We wanted to replicate race conditions as best we could and he moved very well over the dirt here. We're very happy with now he breezed and he came back in excellent order,” said Nixon.

“I'd hate to say we're going to commit to the lead at all costs,” said Nixon. “We just want the race to unfold, for us to be comfortable and be in a position to win turning for home. He's rateable. He came from last in the Blue Grass (April 12 at Keeneland) to be fifth.”

Lions Bay (5-1, Post 10) is the only other holdover from the Queen's Plate field. 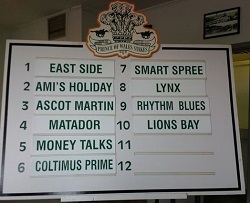 Trained by Jamie Attard, the dark bay son of Sligo Bay-Lions Raw finished sixth in the Plate despite stumbling in the first few strides out of the gate bending his shoe. A two-time winner in four starts for conditioner Jamie Attard, Lions Bay will leave from post 10 in the 1 3/16-miles event. Davy Moran will ride.

Newcomers to the Canadian Triple Crown experience, from the rail out, include East Side, Ascot Martin, Money Talks, Smart Spree, Lynx and Rhythm Blues.

How would #TeamBetAmerica's Molly Jo Rosen play the Prince of Wales?

1-East Side: steps up after putting it all together last out 2-Ami's Holiday: hasn't done much wrong 3-Ascot Martin: maiden with a decent dirt pedigree tries it; jock/trainer are 1-for-2 together 4-Matador: he's going to put it all together & get back to winning one of these days 5-Money Talks: does get back to restricted company & is consistent at the Optional(20) level but this is a major step up 6-Coltimus Prime: is better than what he showed in the Queen's Plate... I think... he's thrown clunkers & come back with big efforts in the past; plus I really like that Justin brought him in early for a work over the track 7-Smart Spree: maiden with beautiful pedigree (he's a half to Occasional View) takes a shot at the big leagues 8-Lynx: stepped up well against stakes types off the maiden score & Albano did come back to run a good 2nd in the Haskell 9-Rhythm Blues: one of two with a win on traditional dirt & hasn't done much wrong since moving to Gonzalez; plus he's got #TeamBetAmerica's Chantal aboard 10-Lions Bay: ran first bad effort in the Queen's Plate & outside post should help him avoid the trouble he's prone to

Exotic Key: 7 & 9 (note: this does not mean I've gone 6 deep in a 10 horse field: simply that I would key those two underneath in exotic wagers) 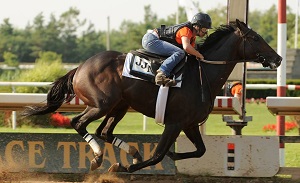