All eyes will be on Santa Anita Park this Saturday, March 7, as Shared Belief tries to make it two in a row by winning the Santa Anita Handicap. But, Shared Belief isn’t the only horse that fans will be watching at Santa Anita on Saturday. Dortmund, the highest ranked three-year-old in the nation according to many racing analysts, is an 8/5 morning line favorite in the San Felipe Stakes. The San Felipe also has attracted Ocho Ocho Ocho, Lord Nelson, Pulmarack, and Bolo.

2 –Ocho Ocho Ocho – 4/1 – The undefeated Street Sense sired colt has every right to improve off of the nose victory in the Grade 3 Delta Downs Jackpot. Ocho Ocho Ocho has been working lights out in the mornings and jockey Mike Smith (star of the soon-to-be-released BetAmerica TV commercials)  can either put the James Cassidy trainee on the lead in this or have him track the other speed. His experience could do give him a big edge and Dortmund, as good as he has looked, might bounce some off of the Robert B. Lewis victory. Ocho Ocho Ocho already has a win at 1 1/16 miles and he did it while running the half in 45.1. He should be nowhere near the 4/1 morning line, but if he is, horseplayers might want to consider backing him to beat some of the other contenders in this.

7 - Bolo – 6/1 – This will be the first time that the Carla Gaines trainee will race over dirt. So far, Gaines has put Bolo on nothing but the grass, where the son of Temple City has thrived by winning 2 out of 3. The last victory, the Eddie Logan Stakes at 1 mile, was ultra-impressive. Bolo dueled on the lead through fraction of 22.2 and a half in 46.1 before pulling away for a 4.5 length victory. It looked like he could have won the race by 10 lengths. If Bolo takes to dirt, he could pose a huge threat to Dortmund, Ocho Ocho Ocho, and the rest. The works since the Dec. 27 Eddie Logan victory have been nothing short of spectacular and Victor Espinoza picks up the mount for Mike Smith who sticks with Ocho Ocho Ocho. 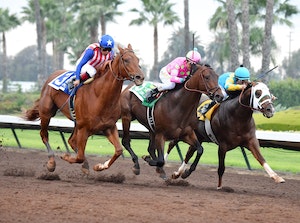 3 - Dortmund – 8/5 – Like Ocho Ocho Ocho, Dortmund, Bob Baffert’s top ranked Kentucky Derby contender, was sired by a Run for the Roses winner. Dortmund looks a lot like his dad, Big Brown. He might actually have a longer stride than what his father had, which is a scary thought. Dortmund ran his heart out last time and that’s why it’s difficult for me to put him on top against such a deep field. He could take a slight step back and there’s a chance that Baffert and jockey Martin Garcia uses the San Felipe in order to teach Dortmund how to settle and then pounce. I expect Dortmund to run well, but the Santa Anita Derby in early April is the one that his connections are looking to win with him and this is the best field that he’s ever faced. If the odds drift, consider for the win, but if they go lower than the morning line, which is likely to happen, only use in the exotics.