It's Memorial Day and like every Memorial Day Santa Anita has a great card for horseplayers. The feature is Race 8, the Grade 1 Gamely for $300,000. 10 fillies and mares are entered for what should be an incredible betting race.

8-Danza Cavallo - 4/1 - Trainer Chad Brown sends this Sunday Break sired 4-year-old filly that will be making her third start in the United States out West. Brown sends jockey Irad Ortiz Jr., who has been tearing it up in New York, out to Arcadia to ride Danza Cavallo. That's an excellent sign. What's also an excellent sign is that this filly gets more ground in this than she did in her last. Firm ground might actually help her chances since for most of her career she's only run over yielding or soft turf. Her works since her last race in April have been very good. Anything close to what she showed in the G3 Long Island Handicap last November will put her in the winner's circle on Monday.

10-Queen of the Sand - 6/1 - There is a ton of speed signed on for this with Three Hearts, Blingismything, Fanticola, Smoove It

and Hard Not to Like all entered. Jockey Draden Van Dyke will have to make out a trip from post-position 10, but if he does, the G3 Santa Barbara winner could make it back to back over the Santa Anita lawn. Queen of the Sand closed into a terribly slow :48.2 half mile and 1:12.4 6 furlong pace in the Santa Barbara. She's going to get a much better set-up pace-wise in this and deserves serious consideration for the top spot in the Gamely on Memorial Day. 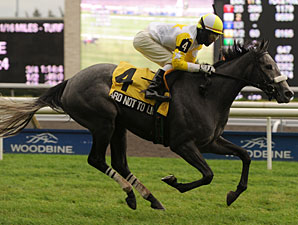 her last when finishing third by 2 3/4 lengths. She won the Jenny Wiley in 2014 and the G3 Endeavour 2 back, making her the class of this field. She could blow them out of the water, but her best races have always been at 1 1/16 mile not at 1 1/8. That extra 1/16 of a mile is what could do her in. There's really no reason to expect her not to go down from the 7/2 morning line. Any odds move downward would make her an underlay in this spot, which is why she's best on the bottom of exotic tickets and not on top.