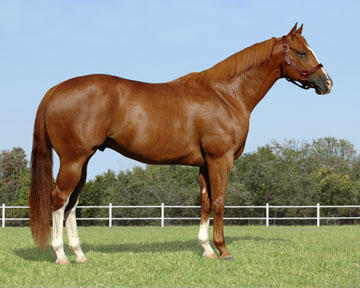 Apollitical Jess was an AQHA Champion Quarter Horse. He is retired and as a stallion,  producing excellent crops of runners. Four of his offspring will compete Saturday night at Los Alamitos in the $15,000 Elan Again Handicap.

Eight horses will face the starter in the 350-yard feature, which will be headed by Apolitical Zoom, Apollitical Chic, Apolitical Pac, and Political Chick. The four mares by World Champion Apollitical Jess figure to be major players in the Elan Again, which is scheduled as the final of eight races on the card. First post is 6 p.m.

Apolitical Zoom could end up with the most support among the horseplayers based on a solid string of races dating back to February 2015. She was second in the Los Alamitos Winter Derby last year and was an easy winner in the Las Damas Handicap on November 21. In her first start of the year, she was third to champion mare Quirky in the Grade 1 Charger Bar Handicap. She’s won three of her last six starts and has hit the board in six of her last eight starts.

Apollitical Chic beat allowance foes in her last outing, while Apolitical Pac is a four-time career winner, could get a lot of support as well, but she’ll be making her first ever California start.  Political Chick, also sired by Apollitical Jess, a Kentucky-bred mare that also figures to contend after four straight top four finishes in local stakes races. The remainder of the field includes Valiant Energy, stakes winner Babbler, Morethanmeetstheye, and Lavish Ivory.