In this article, I will be listing (in my opinion) the top five jockeys that are currently racing. Before I do that, I must go back to the beginning of my love for horse racing. 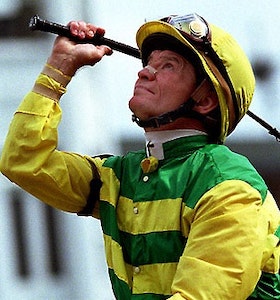 When I was a young boy,  I'm guessing only six or seven years old, the Foodland grocery chain had a promotion called "Let's Go to the Races".  It depended upon how much money in groceries you spent as to how many of the race cards you would receive. It was the equivalent of hitting the pick 5. On each racing card you received, you would have to match the numbers you were given on that card to the number of the horse that won the 5 races listed. Over the course of contest, I kept noticing a name in the winner’s circle by none other than Pat Day. I would look at the numbered horse we had and I would hope Pat day was in the saddle.

His career would span over 3 decades. He was nicknamed "Patient Pat" for his knack of holding back his horse and trying to time the line out just in time.

He is a four time winner of the Eclipse Award for outstanding jockey and was inducted into the Hall of Fame in 1991. Pat Day has ridden nine Triple Crown winners and he was quoted saying that Easy Goer was the best horse he ever rode in his career. In 1989, he set a North American record when he won 8 of 9 mounts at Arlington Park. On August 3rd of 2005, Day announced his retirement he had 8,804 career wins and prize money of nearly $298 million.

So my five current favorite jockeys? Here you go:

Joel Rosario: Joel paid his dues and learned his craft coming to his tremendous assurance the old-fashioned way, via toil to triumph with Tonalist. His mount when he scored an amazing win in 2014 at Belmont Stakes, which followed hard on the heels of a stellar ride and win in the Peter Pan Stakes.

Rafael Bejarano: Bejarano is a champion rider from Peru and has gotten many race track crowds on their feet over the years! Almost unbeatable down the home stretch, Bejarano has ridden many great horses in his stellar career. Among his many sterling mounts have been Papa Clem and Square Eddie, both now young stallions. There are few better riders when big money is on the line. As attested by his wins in the Breeders' Cup Distaff in 2007 and Breeders' Cup Dirt Mile in 2013.

Victor Espinoza: Victor came to the national spotlight with his excellent riding aboard War Emblem. Whom he guided to sensational scores in the Kentucky Derby and Preakness Stakes in 2002. He is a superb judge of tactics and situation. Victor renewed his classic talents when steering the people's horse California Chrome to tremendous wins in the 2014 Santa Anita Derby, the Kentucky Derby, and the Preakness Stakes. Mike E. Smith: Mike is a hall of fame rider best known in recent years for bringing home Zenyatta, to many of her most mind-boggling runs. A king judge of the unfolding drama before him. Mike Smith demonstrated his vast talent when he took over as rider of Shared Belief in the Los Alamitos Derby, where the talented son of Candy Ride scored an exciting win of 4 links over Candy Boy.

Kent Desormeaux: Kent has long been a gallant and top race rider across the United States. One of his best rides was aboard the former claiming horse Imperative, who beat heavily favored Game On Dude in the Charlestown Classic of 2014. Kent took Imperative back from a blistering pace and saved enough horse to steam by grade one types Moreno and Game On Dude in the final stages of (The Classic) to bring home a one million dollar winner's check to the connections of Imperative.