Their annual live Quarter Horse meet, which runs through October 15, will feature 17 stakes races with over $1.3 million in purses. Last Saturday, they hosted trials for the Iowa Double Gold Derby as well as the Iowa Double Gold Futurity. Shesa Vivian, a daughter of Just Amazing Jess, was the fastest Iowa-bred in the Double Gold Derby. Lil Stepper, trained by Stacy Charette-Hill leads the qualifiers for the Futurity. Both finals will be contested on Sunday, September 4. 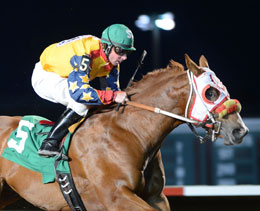 Ajs High, who has won two Bank of America Challenge stakes, is expected to return to action on September 17

Post times for the meet are Fridays at 5:30 pm and Saturday and Sunday matinees which begin at 1 pm. for more information on special events and stakes, visit www.prairiemeadows.com.
Racing
Loading...