Earlier this week, one of my favorite writer/radio personalities texted me "The Preakness is totally inscrutable." And he's not wrong.

The reason? In a word: speed.

There's too much of it. There are 10 horses in the field: 3 are confirmed frontrunners (5-Bayern, 8-Social Inclusion, 9-Pablo Del Monte), another 5 are wouldn't-mind-the-lead/sit-just-off-it types (1-Dynamic Impact, 2-General a Rod, 3-California Chrome, 4-Ring Weekend, 10-Ride On Curlin), and only 2 have done their best closing (6-Ria Antonia, 7-Kid Cruz).

So there are only two possible pace scenarios here and it's a whole Tortoise and the Hare situation...

1. Hare: a Quarter Horse-type speed duel where there's a rush to the lead and they all cook each other or 2. Tortoise: because everyone is so sure everyone else is going to the front, the jockeys all take back

So is this inscrutable Preakness even possibly playable?

You'll notice there are a few horses missing off my tickets: General a Rod (talented but he's a speed horse who couldn't hold on over a speed favoring Gulfstream track most of the winter), Ring Weekend (has the ability but the Tapit side of his pedigree makes him unreliable), Bayern (will be a fantastic dirt miler), and Ria Antonia (LilMama needs class relief).

So why am I using a six horse Super Box? By post order: So you may be asking why did I include all the speed in my Super? Because I think this year is wide open and it's a matter of who's just got the gumption to stick around inside the final 16th. And - with this group - at these prices - lord only knows who that will be. 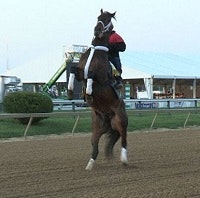 The plan for 'Curlin I'm told is to sit just off the hip of 'Chrome and get first run off the turn. For a horse who started the season as a freakish sprinter, he's about as tactical as the Derby winner. Does that mean he wins? Not in my mind. But he's got the talent and - if he can hold it together - he might just get the big win that's eluded him all year long. The Hi Ho Curlin routine from Preakness morning, however, does not bode well.

Single biggest question I've gotten all week: How Do We Beat 'Chrome?!? The answer is: this is his to lose. It's not that he so much towers over the field on paper, it's that he just hasn't done much wrong since December. How do you argue with that record or the way he slips away from horses on the turn? If he is vulnerable it's that - like Orb last year - he's due to throw a clunker at some point (few horses - even Zenyatta - are perfect).

And there is one other potential X factor with 'Chrome: he proved extremely studdish in the Derby paddock ~ ie: he showed everyone just what a full grown man he's become. That attitude - especially now that there's a filly around - could cause him to lose his race before they even hit the track. That they don't saddle indoors (rather out on the turf course) might be the best possible situation because he's not thisclose to her (though stallions are known to be able to smell mares from as far out as 2 miles).

I go back to my pre-Derby theory: I have no idea who wins this race, but the most likely scenario has us looking at a live Triple Crown threat in three weeks. And given how fantastic the prices are on other contenders, I would certainly get some exotic wagers in. At the very least, take a shot with some show bets.

If you're new to the game: this is the perfect kind of race to start playing. It doesn't matter your budget, there are a lot of ways to go and a lot of money to be made. Best of luck!