Writing the stallion marketing script for Justify’s first season in 2019 wouldn’t have been the toughest task in Thoroughbred breeding.

Introducing the First-Crop Sires Series 2022: Choose a Sire for us to Follow

TwinSpires is bringing back the First-Crop Sires Series for 2022. Last year's series included Gun Runner and Arrogate, and this season, Justify tops our list to follow closely.

Saratoga: How to bet the 2022 Jim Dandy Stakes

A compact, but fantastic, field of four three-year-olds will go postward in the $600,000 Jim Dandy S. (G2) at Saratoga on Saturday.

The 2022 Triple Crown, comprised of the Kentucky Derby, Preakness, and Belmont, spans a five-week period from early May through early June. But preparations for the series begin months earlier.

Like most U.S. betting outlets, you won’t find any single bets available on a horse to win the 2022 Triple Crown with TwinSpires. But you can bet on each individual race.

How long are the three Triple Crown races?

The three races which make up the U.S. Triple Crown of Thoroughbred horse racing—the Kentucky Derby, Preakness S., and Belmont S.—each provide a test over a different distance at a different venue.

We look at some fast facts and figures about the Belmont Stakes, including records for fastest time, largest win margin, victories by a jockey, and the number of fillies who triumphed in the historic race.

When Gun Runner made an impact in 2021 like few first-crop sires ever do, it seemed inevitable that his progeny would be serious players in the 2022 Triple Crown series.

The Racing Roundtable is back to discuss the implications going forward following Preakness weekend.

The tandem of trainer Chad Brown and Klaravich Stables earned their second Preakness S. (G1) win after Early Voting finished 1 1/4 lengths in front of 6-5 favorite Epicenter in the second leg of the Triple Crown.

There are few aspects of the game that Chad Schexnayder doesn’t touch.

Traditionally one of the top four most-wagered programs of the year in the U.S., total handle on the Preakness card figures to be $100 million or thereabouts.

The Preakness Stakes Betting Guide is your passport to the vital knowledge you will need to play the second leg of the 2022 Triple Crown.

Your one-stop-shop for everything related to the 2022 Preakness Stakes!

A strong field of nine three-year-olds will travel 1 3/16 miles on the Pimlico dirt in Saturday’s $1.5 million Preakness S. (G1).

How to bet against Epicenter in the Preakness Stakes

Eight sophomores have the daunting task of trying to upend the clear favorite in the 2022 Preakness Stakes.

The Jury: Bets and fades for 2022 Preakness Day

The TwinSpires Jury is back with thoughts on the big day at Old Hilltop and elsewhere.

How beaten Kentucky Derby favorites have fared as Preakness favorites

A post-World War II history of beaten Kentucky Derby favorites who were also the post-time favorite in the Preakness.

Looking for quick takes on the 2022 Preakness (G1)? Here is analyst Kellie Reilly's one-sentence summary judgment on the nine contenders in Saturday’s 1 3/16-mile classic at Pimlico.

Creative Minister will jump straight from back-to-back wins over maiden special weight and entry-level allowance rivals to the Preakness, and connections forked over a $150,000 supplemental fee to run since he wasn’t Triple Crown-nominated.

Listed at 50-1 on the morning line, Fenwick promises to be the longest shot in the Preakness, but the 80-1 longest shot (Rich Strike) just won the 20-horse Kentucky Derby.

Unplaced in his first two stakes attempts, Armagnac will join the Triple Crown scene following an encouraging 4 1/4-length allowance triumph at Santa Anita on May 8.

How does the Preakness field stack up from a Brisnet Speed rating perspective? Let’s examine the contenders, ranked by highest last-out number.

On paper, #5 Early Voting is Epicenter’s toughest opponent in the Preakness Stakes.

Secret Oath will make her second attempt against males following a convincing win in the Kentucky Oaks (G1) 15 days earlier.

Early Voting easily won his first two starts on the front end at Aqueduct, including the Withers (G3) in early February, but the competition was suspect. He received a litmus test in the April 9 Wood Memorial (G2), performing admirably

How much does the winning Preakness Stakes jockey earn?

Jockeys turning up to the Preakness Stakes are riding for much more than prestige. For them, it’s also the opportunity at one of the biggest paydays for the year.

How Kentucky Derby longshot winners finish in the Preakness

We look at 10 of the longest shots to win the Kentucky Derby and how they fared in the Preakness Stakes, the second jewel of the Triple Crown.

Pimlico Stakes Spot Plays for May 21

A total of eight black-type events will accompany the $1.65 million Preakness S. (G1) at Pimlico on Saturday.

If there is one contender in the Preakness Stakes cast that could surprise the top four and light up the tote board, it is #7 Armagnac (12-1).

American Pharoah was the 12th Triple Crown winner, having broken a 37-year drought to win the famed trio of races in 2015.

The Preakness (G1) media guide lists six female winners from a total of 55 fillies who took on males in the classic.

Betting the 2022 Preakness on different budgets

For the third time in four years, the Kentucky Derby (G1) winner will pass on competing in the Preakness S. (G1), which means handicapping the Preakness will be a bit easier than originally expected.

Listed as the 6-5 morning line favorite, Epicenter exits a bitter second in the Kentucky Derby, and he has a big chance to make amends in the Preakness.

Rating in 18th after the opening three-quarters of a mile, Simplification uncorked a rally from far back to finish fourth, beaten 3 1/2 lengths at 35-1 odds, in the Kentucky Derby.

Below we analyze the six Preakness new shooters in the field and examine their chances of earning the blanket of Black-Eyed Susans on Saturday, May 21.

Justify is the 13th and most recent Triple Crown winner, having achieved his milestone in 2018 in remarkable circumstances. Below are 10 interesting facts about Justify.

The Preakness S. (G1) is taking place on Saturday at Pimlico, which means it’s time to start analyzing the entries, reviewing the pre-race workouts, and counting down the minutes until post time.

Epicenter the 6-5 choice against eight others in Preakness

Epicenter will be strongly favored to give Hall of Fame trainer Steve Asmussen his third win in the $1.65 million Preakness S. (G1).

The luckiest (and unluckiest) draws for the Preakness

What's in a number? We examined every Preakness Stakes since 1909 to find out which stall has the luck factor.

Who was the most surprising Preakness winner of all time?

Let's revisit some of the biggest Preakness upsets, and then it's up to you. Who was the most surprising Preakness winner of all time?

How much do you truly know about the history of the Preakness Stakes? Take this quiz and find out!

To get you ready for the second leg of the Triple Crown, let's look back on the last decade of races, as we examine the top 10 Preakness racing trends.

Television footage of the Triple Crown from the 1960s and early 1970s is now publicly available, and its most interesting moments are well worth watching. 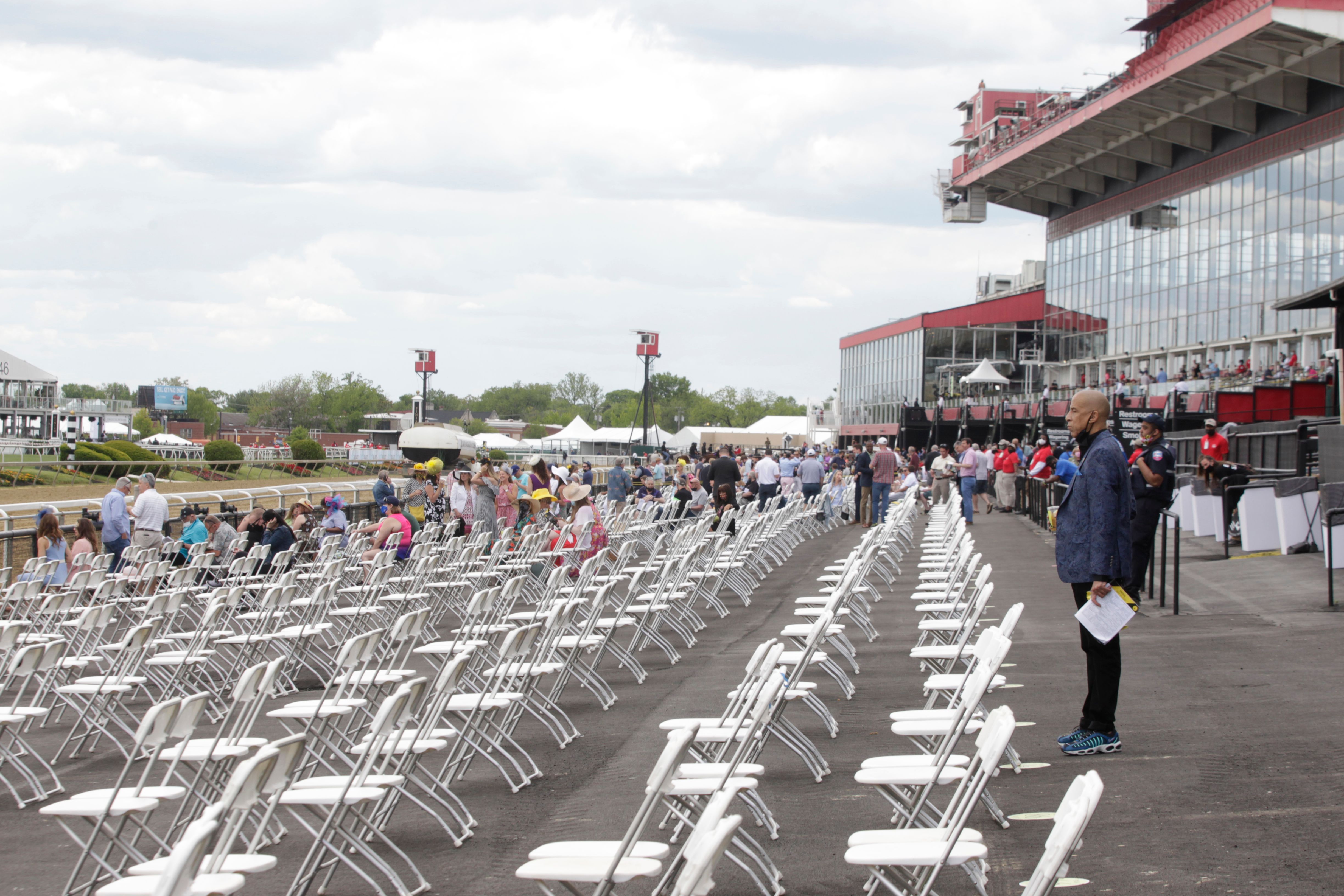 The 2022 Preakness is traditionally the second jewel among the Triple Crown of horse racing, taking place in mid May following the Kentucky Derby. COVID-19 led to a delay in 2020, but for 2022, there is a great deal of excitement among the large field of worthy contenders aiming for this coveted prize of American horse racing. Find useful links and contender profiles for the 2022 Preakness below:

Video of the 2020 Preakness Stakes

Video of the 2019 Preakness Stakes

Video of the 2018 Preakness Stakes

Watch as Justify prevails over Good Magic following a wire-to-wire battle to capture the 2nd leg of the 2018 Triple Crown at Pimilico Race Course in Maryland.

Video of the 2017 Preakness Stakes

Watch the 2017 Preakness Stakes, as Kentucky Derby champion Always Dreaming battled with Classic Empire for the majority of the race, before Cloud Computing pulled ahead for an upset win.

Video of the 2016 Preakness Stakes

Check out footage of the 2016 Preakness Stakes, as jockey Kent Desormeaux notches sought revenge with Exaggerator, finally getting the wet track he loved!

Find notable historical records for the Preakness Stakes below:

A Brief History of the Preakness Stakes

The Preakness Stakes, also known as the second leg of the Triple Crown, is one of the most important and attended horse race in the sport’s history. Run every year on the third Saturday in May, the historic race is regularly the second most heavily attended race of year, typically only trailing the Kentucky Derby. In fact, 2016 was a record setting year for the Preakness Stakes, with 135,256 people came to the Pimlico Race Course in Baltimore to watch the pulse-pounding race.

The first running of the Preakness Stakes took place all the way back in 1873. Oden Bowie, the former governor of Maryland, named the race after the colt Preakness, who as a major underdog won the Dinner Party Stakes on the day Pimlico opened its doors in 1870. In it's infancy, the race struggled  to succeed and moved multiple times in the early years. In 1890 the race moved to Morris Race Course in the Bronx, New York. It failed to run for the following three years. The next race was held in 1894 at Gravesend Race Track on Coney Island, where it ran for a total of fifteen years. In 1909, the Preakness was brought home to Pimlico and it has been run here ever since.Originally run at 1 ½ miles, the race has been run at several different lengths before being set at 1 3/16th miles, where it has stayed since 1925.

Winners of the Preakness Stakes are honored by having their silks painted on the jockey and horse weather vane atop a replica of the Old Clubhouse cupola. Winning jockeys are presented with the famed Woodlawn Vase, and take home a half-sized replica for themselves (the original trophy is stored at the Baltimore Museum of Art). The winning horses are draped in a blanket of replica black-eyed Susans, the state flower of Maryland. The race is forced to use replicas because the race is run a full two months before the flower blooms naturally. Ironically, actual black-eyed Susans have never been used in the race fondly known as “The Run for the Black Eyed Susans"