If you are following Quarter Horse racing at Louisiana Downs, you will see jockey Damian Martinez 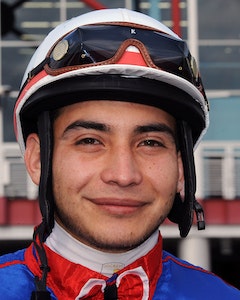 in the winner’s circle on a very regular basis.

One of the youngest riders on the circuit, Martinez, 23, began riding in Texas in in 2012, but has found great success in Louisiana for the past year. He finished second to David Alvarez at Delta Downs and was one of the top riders at Evangeline Downs as well.

Martinez is the current leading rider at the Louisiana Downs meet and has two finalists in the $271,738 Mardi Gras Futurity (RG2) on March 18. Abraham Huitron’s Cos I Get It, a son of Tee Cos, set the fifth fastest time in Mardi Gras Futurity trials run on February 25.

On Saturday, March 4, Martinez will ride five juveniles in trials for the $273,000 Harrah’s Entertainment Futurity. He is hopeful he will qualify one for the final as he has mounts in the $271,738 Mardi Gras Futurity (RG2) and the $93,898 Mardi Gras Derby on March 18.

The native of Mexico just won his 300th career race and has 19 stakes wins to date. His most accomplished stakes winner was 2015 AQHA world champion, JRC Callas First, who won ten stakes. Martinez also won the 2016 Texas Classic Futurity at Lone Star Park with Eye N Capo as well as the 2016 Firecracker Futurity at Delta Downs aboard Platinum Fdd.

Martinez rides for several trainers including Eusevio Huitron, Bobby Martinez and Vann Haywood.  In 2016, Martinez won 102 races; finishing second in AQHA standings by wins, to David Alvarez. The two Louisiana leaders were two of only four Quarter Horse jockeys in the country to eclipse 100 wins for the year.

Louisiana Quarter Horse racing boasts a number of seasoned veteran riders such as John Hamilton, Gilbert Ortiz, Donald Watson and Alfonso Lujan. Martinez is certainly a jockey to watch now, and in the future!