In trials two weeks ago, Indiana Grand trainer Randy Smith had a blockbuster showing. He won seven of the nine races on the All Quarter Horse card, qualifying multiple runners for the three stakes that will be contested this Saturday night. It was not just an exemplary showing in the Quarter Horse record books; Smith set a new record at Indiana Grand Racing and Casino for most wins recorded in one night by a trainer of any breed.

Smith is loaded for each of the finals. He will saddle Beach Cartel and Beach Zoomer in the Bob Woodward and four 3-year-olds in the SSA Derby: fastest qualifier Coco Beach; Jumpn Chick; My Louisiana Rod and Megatron Harry. 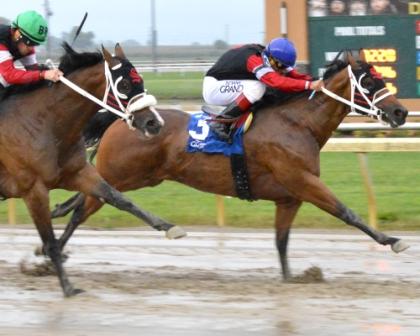 But he throws down the gauntlet with six qualifiers to the $192,739.00 QHRAI Stallion Service Auction (SSA) Futurity, which in its 17th running, boasts a record purse. The fastest qualifier, Cb Come Fly With Me is trained by Joe Davis, and her time of :17.750 was eye-catching to say the least. Smith trains second-fastest qualifier Wrs Whoseyourdaddy, a Big Daddy Cartel filly owned by his wife, Debbie. If she can't get to the wire of the 350-yard final, he has noteworthy chances with Beach Zoomer, Zoomin B Cartel and Jess Jace. Or could there even be a price on a Smith trainee?  Dnachrystalsfighter and Cartels Justice were the ninth and tenth fastest qualifiers.

Racing fans who attend Saturday night's racing can enjoy the evening's promotion, which has been named “Corntastic.” The festivities include numerous corn-themed events, from a corn recipe contest to cornhole competitions to strolling scarecrows. First post for the evening is set at 6:05 p.m. (EST) with the Quarter Horse stakes running as the ninth, tenth and eleventh races on the card.