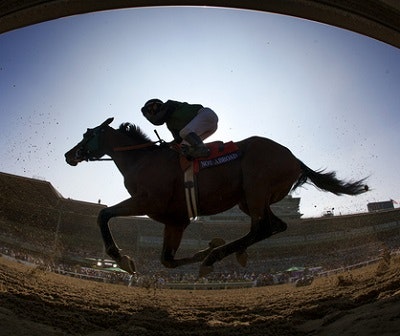 Saturday's feature race at Santa Anita Park is the G3 Tokyo City Cup. It's a rarity in modern American horse racing, a 12-furlong affair that promises to be much more about stamina and grit than speed and flash.

Why is it, though, that longer-distance dirt races have nearly vanished from the American racing landscape? Sure, the Belmont Stakes is still run at a mile and a half, as is the Brooklyn Handicap, and there's a $500,000 race on Breeders' Cup Friday, the Marathon, that is contested at an even longer distance (14 furlongs). After that, though? There isn't much to speak of.

Some in the game have pressured racing secretaries to card more races at marathon distances. The problem there is that those racing secretaries are tasked with carding races that will fill, and longer races often don't. Take, for instance, the annual two-mile trek at Saratoga. 2013's renewal drew only five horses (and only four finished the race), and a similarly small field of six horses and five finishers ran in 2012's attempt.

The fact is that horses just aren't bred to go these distances anymore. The emphasis is on breeding for speed, not necessarily stamina, and the numbers back me up on this. No Belmont Stakes winner in the past four years has run the mile and a half in under 2:30, and only three victors in the last 12 runnings have clocked in at under 2:28 (Summer Bird, Jazil, and Birdstone). The 2013 running saw Palace Malice somehow draw away from the field while running the final quarter-mile in :27.58. I have nothing against Palace Malice, a fine horse, but when a horse comes home in :27 and change and doesn't come close to getting caught, there's a problem.

Ideally, the Kentucky Derby points system (which rewards horses for winning longer races) will bring positive changes to the racing landscape. Perhaps horsemen will begin looking for horses who can get longer distances, and perhaps we'll see more marathon-type races as a result.

For now, though, we're left with a world where it's more important for a horse to breeze an eighth of a mile as fast as possible at auctions than for that horse to carry his speed a distance of ground. Until that changes, races like the Tokyo City will be extremely rare.