In celebration of St. Patrick's Day, we've decided to shine the spotlight on moments in horse racing where one party or group has been blessed with the luck of the Irish. Cliches notwithstanding, there have been instances in the Sport of Kings where sudden strokes of good fortune have propelled horses and horsemen to new heights, generally meaning great things for the game. Here are several of those moments...

Meadow Stable “loses” a coin toss and gets Secretariat

Penny Chenery made the decision to send the mare Somethingroyal to Bold Ruler twice. A coin toss between Chenery and the Phippses would determine which party got which foal. The Phippses “won” the coin toss and the first foal, a filly named The Bride. Of course, the second foal was Secretariat, the Triple Crown winner and one of the fastest thoroughbreds ever to race on American soil.

Alysheba rises from his knees to win the Kentucky Derby

Jack Van Berg's Alysheba was rolling when the field turned for home in the 1987 Kentucky Derby. Eventual rival Bet Twice led in the stretch but bore out, and the rallying Alysheba clipped heels with him and nearly fell to the ground. However, the son of Alydar picked himself up, continued his run, and hit the wire in front to win the Run for the Roses. It was the first of several high-profile wins for Van Berg's champion, who ended his career with a then-record $6,679,242 in earnings. 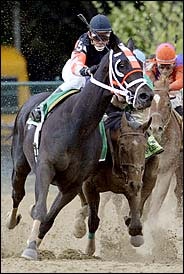 Afleet Alex rises from his knees to win the Preakness

Just over 18 years later, Afleet Alex channeled Alysheba at Pimlico. The beaten favorite in the 2005 Kentucky Derby took flight around the far turn, only to clip heels with Scrappy T. For a moment, Afleet Alex looked like he was going down, but he regained his momentum and waltzed to a convincing victory. The oddest anecdote from that afternoon, though, was that if Afleet Alex had fallen, leading to a likely disqualification of Scrappy T, the horse who would have earned the victory was...Kentucky Derby winner Giacomo, who ran third that day. The racing world may have been spared the most awkward lead-up to the Belmont Stakes in history.

Seabiscuit goes from a claimer to a champion

At this point, we all know the story. Seabiscuit, a former claimer on the California circuit, was sold to the Howard family and transferred to the barn of Tom Smith. The quirky horse slowly turned into a celebrity, topping War Admiral in his celebrated match race and retiring in style after a victory in the 1940 Santa Anita Handicap.

Big Brown gets rained off the turf, but turns into a freak

Big Brown was originally thought to be a turf prospect. After a monster effort at Saratoga as a 2-year-old, he was transferred to the barn of Rick Dutrow, Jr., who waited for a turf race that winter at Gulfstream Park. One came, but it was taken off the turf due to wet weather. Dutrow kept his horse in the race (now on dirt), and Big Brown emerged as Florida's top 3-year-old. His campaign included wins in the Florida Derby, Kentucky Derby, Preakness Stakes, and Haskell Invitational, and none of those runs may have ever happened if not for a certain weather system that struck Gulfstream Park that day.

Citation's dam survives the trip to America and produces a champion

We'll close with this one, as it's a story that doesn't get told nearly often enough in the racing world. Calumet Farm owner Warren Wright purchased Hydroplane II from overseas interests in 1941 as a broodmare prospect. However, this was when World War II was breaking out, and German U-boats carrying torpedoes were stationed in the Atlantic. Therefore, the boat carrying Hydroplane II had to go the long way through the Pacific Ocean, and after a long, brutal trek, she eventually got to the U.S., was bred to Bull Lea, and produced Citation, who won the Triple Crown during a then-record 16-race winning streak.