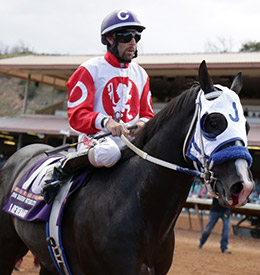 On Sunday, July 24, A Revenant scored an impressive victory in the $1,000,000 Rainbow Futurity (G1) at Ruidoso Downs. The son of Mr Jess Perry was the fastest qualifier in trials and lived up to his post-time favorite status with a big effort against a talented field of 2-year-olds.

Ridden by Cody Jensen for trainer Mike Joiner, A Revenant covered 400 yards in :19.708 and impressed the veteran rider.

"He got away (from the gate) extremely well for him," said Jensen, who notched his first win in the Grade 1 event . "I drew next to Muddy Watters and he starts well. I liked that because it gave us a target to run at."

Owned R.D. Hubbard, Johnny Cope, Ray Willis and Butch Southway, A Revenant was purchased at last year's Ruidoso Select Yearling Sale for $152,000. He has already bankrolled $604,800 through July, and tops all Quarter Horses in earnings for 2016.  The second-ranked Duponte stands at $578,519 with victories in the Harrah's Futurity at Louisiana Downs and the $1.1 Million Heritage Place Futurity at Remington Park.

Next up for both A Revenant and Duponte will be trials for the Grade 1, $3,000,000 All American Futurity on August 19 and 20.  The ten fastest qualifiers will advance to the final of the prestigious race for 2-year-old Quarter Horses on Monday, September 5.  The big Labor Day card closes out the Ruidoso Downs meet each year.

There is lots to look forward to in the weeks to come at Ruidoso Downs, both with juveniles and the 3-year-olds pointed to the All American Derby.