Ria Antonia to the Preakness? 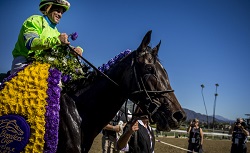 I stepped off my post-Derby plane in San Francisco this morning to read the news that Ria Antonia has moved to the barn of Tom Amoss and now has a date with the boys in the Preakness.

While this means a fourth trainer in what-will-be 9 starts for the daughter of Rockport Harbor, it also means a step up in company too. Say what you want about this group of 3yo colts: they're consistent ~ if nothing else ~ in the ability to beat each other.

So as we look towards a probable Preakness field of California Chrome, Social Inclusion, Ring Weekend, Kid Cruz, Ride On Curlin, Dynamic Impact, Bayern, and Pablo del Monte... does Ria have what it takes to be the sixth female winner of racing's middle jewel?

My answer: while unlikely, it's not totally unfathomable.

So she's technically only won one race in her career (remember: the Breeders' Cup win was via DQ). So she's got maybe-a-miler's pedigree. So she's had more jockey and equipment changes than most horses will see in a lifetime.

The problem with any filly running the Preakness is the last one to do it was Rachel Alexandra. 'Rachel was a freak: that once-in-a-lifetime animal that you just sit back and enjoy watching. You can't Be the great Rachel: you can just hope to be in the same stratosphere. And - so far - Ria has been... well... the failed Mars rover compared to Rachel's Hubble Telescope.

From a statistics side, are there any comparisons we can draw?

- Both of their first names start with R.

- They both lost their first starts and won their second: both in sprints and both over pretty good fields.

- They both lost their third start; Rachel in the G3 Debutante, Ria in the Synwford.

And that's basically where the similarities end.

What worries me more about Ria Antonia as a Preakness contender is what her (now former) connections said after the race: "I had her out in a good spot. I was where I wanted to be. I wanted to pounce on
[Untapable], but she's too good. The only thing I did was make her run faster." - jockey Mike Smith

Obviously her career is up to the owners and they're doing what they think is best for their investment. All the filly can do is run where she's entered. The person you have to feel for here is Tom Amoss: he's in a no-win situation... in the unlikely event she wins, he's golden; but should she lose, will the owners move on to yet another trainer? Is this really the spot he would normally run her? In short: no.

Tom is a very conservative trainer: very smart about his entries and that's why he owns a 34% win clip with a 65% in-the-money rate this year.

Ria would probably be better suited to cutting back to a sprint distance and given some class relief to regain some confidence. Then again: anything's possible when they load into the gate.