Road to the Kentucky Derby: What Signature Preps are the Most Successful?

In most families, get togethers revolve around birthdays, holidays, and other events that mark the passing of time. Although we do that in my family, our tradition, which my father started when I was around 13 years old, revolves around the Triple Crown races and, in particular, the Kentucky Derby. No matter where I was, I usually found a way to make the trip back to Arizona to hang out with the family at Turf Paradise on Derby Day.

I collected quite a few glasses during those years. Most of the glasses have been broken, but my brother, who has always been better at taking care of things like commemorative glasses than I have, stores his collection in a cabinet in which the freebies can live a long and sheltered life.

On the Derby glasses are the names and years of every Kentucky Derby winner since the race was first run. Although the way to get into the Kentucky Derby is to now garner points, it used to be graded stakes earnings, winning, running well, or just showing up in one of the major prep races, the Florida Derby, Arkansas Derby, Santa Anita Derby, Wood Memorial or Bluegrass is still the best way to get your picture taken on the First Saturday in May.

Which prep races have produced the most Derby winners and which has been the most effective place to prep in modern times?

Where to prep for the Roses? 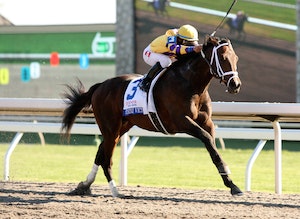 1. Bluegrass Stakes – With 23 Kentucky Derby winners in its history, Keeneland’s top race for three-year-olds has produced the most Derby prep winners. The Bluegrass, which will be run over dirt for the first time in a long time (now that the whole artificial track thing has run its course), figures to garner plenty of top Derby prospects in 2015. No horse has finished worse than 4th in the Bluegrass and gone on to win the Kentucky Derby. Sea Hero and Thunder Gulch both finished fourth in the Bluegrass Stakes, Sea Hero in 1993 and Thunder Gulch in 1995, and went on to win the Run for the Roses. Street Sense was the last Bluegrass participant to win the Kentucky Derby. He did it in 2007. 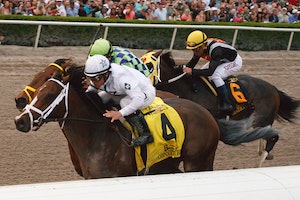 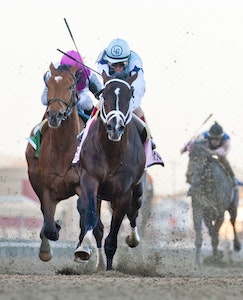 3. Wood Memorial Stakes – The 20 Derby winners from the Wood Memorial have all finished 1st, 2nd, or 3rd in the Wood with the exception of Count Turf who finished 5th in 1951. Secretariat, in the famous Wood Memorial Stakes of 1973, finished 3rd in New York’s signature Kentucky Derby prep race. There’s also Fusaichi Pegasus who was stamped as a Triple Crown winner as soon as he burst past his rivals and won the Wood Memorial in 2000. FuPeg did win the Kentucky Derby but he failed to defeat Red Bullet in the 2000 Preakness Stakes. The brilliant Funny Cide, who failed to win the Triple Crown when finishing far behind rival Empire Maker in the Belmont Stakes, prepped for the Derby in the 2003 Wood Memorial. 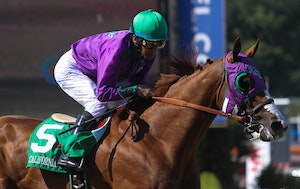 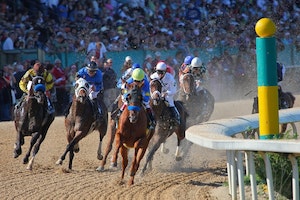 5. Arkansas Derby – The Arkansas Derby has produced five First Saturday in May winners. The most famous have been Lil E. Tee, who finished second in the Arkansas in 1992 before upsetting the great Arazi at Churchill Downs and Smarty Jones in 2004, who won the Kentucky Derby as a 5/2 favorite after running down Lion Heart in the slop. The Arkansas has produced some terrific Derby runner-ups, though, especially Victory Gallop who ended Real Quiet’s Triple Crown bid by a nose in the 1998 Belmont Stakes.