Tuesday evening the middle four races on the Rosecroft Raceway card should prove competitive and revealing, while this Friday evening the focus will turn to Dayton Raceway in Ohio as the sport's best older pacers and older trotters convene there for a pair of six-figure stakes.

Beginning with the sixth race at Rosecroft on Tuesday, a quartet of races on that card all look very competitive. The sixth is the $12,000 Open for pacers and at least one-half of the starters merit respect.

Delaware invader Handsome Henry K rates the solid favorite, while former standout Abelard Hanover will loom a serious player from post nine in the second tier. But local favorites Hi Sir (Russell Foster) and Diamondkeeper (Roger Plante, Jr.) will both be looking to defend the home track's honor against the invaders. Diamondkeeper won the inaugural Open here on opening night and Hi Sir has a definite fondness for the oval although his best races often come toward the end of the meet. 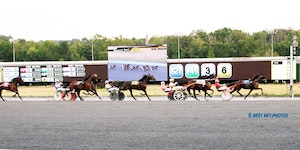 of $4000 last five conditioned event, but a trio of these pacers will garner most of the attention. Zooez Boy Henry, JW Renegade and Arpegio Hanover will vie for favoritism and the lion's share of the purse in this spot. JW Renegade is only three, but he's developed into a potential star for trainer-driver John Mackinnon, while Arpegio Hanover was the spring meet champion in voting conducted among the local scribes.

Then one race later in a non-winners of $6000 last five starts class for pacers looking to earn a spot in the Open, railbound Spinout, a former Maryland Sire Stakes star, Brody and Caviart Tyler will vie for favoritism and possibly the top spot in this event. Caviart Tyler has a definite fondness for the oval and the Megan Roberts trainee was a previous selection as the horse of the meet. Brody has been competitive at the upper levels in his local visits.

Then one race later in the $12,000 Open Trot, BWT Taj, Ruiz and Third Coast will be among the main contenders to garner the lion's share of the pot in this event.

The pace attracted reigning horse of the year Wiggle It Jiggleit (Montrell Teague), who drew post five and will have three of his primary contenders inside of him. Freaky Feet Pete (Trace Tetrick) drew the coveted rail, just inside of Always B Miki, a handy 1:48.2 winner last weekend at Hoosier Park who owns three 1:47 triumphs this year and several wins over 'Wiggle It' who has also beaten him on more than one occasion. Luck Be With You will leave from post four and is one of the best horses off the gate in the country.

One race earlier the top trotters will be on display in the Dayton Trotting Derby. Crazy Wow, one of the sport's top sophomores last year, drew the rail and will face Shake It Cerry, Obrigado, Il Sogno Dream and Maryland-bred Centurion ATM in the overflow field of 10 horses.

Monday evening at Harrington Raceway the two-year-olds took center stage in the second round of Delaware Standardbred Breeders Fund eliminations. Based on the results, a clear-cut favorite has emerged for next week's $100,000 DSBF final, although there are numerous contenders who appear headed for that event.

Spanish Dream (Victor Kirby) overcame post six to win on Monday in a stellar 1:54.4 for trainer Jim King, Jr., notching her second win in the series although she drew poorly in both. One week earlier Spanish Dream overcame post seven to win by three lengths in 1:57 over a sloppy track that was at least a second slow. The Maryland-bred daughter of Dream Away lowered her lifetime mark by more than two seconds with her latest tally and looms the choice for the final regardless of the post.

But three other elim winners emerged in sharp fashion on Monday. Westwind Roddylee (Tony Morgan) rebounded from a third-place finish as the odds-on choice the previous week to draw clear late to a 1:57.2 score for trainer Jason Skinner and owner-breeders Joel & Diane Halpern. Logan's Girl (Kirby) overcame post seven and a first over trip to prevail handily in 1:56.2 for her second straight DSBF elim score, then later Spinpressive (Ross Wolfenden) garnered her diploma by winning in 1:56.3 for owner-breeder-trainer and petite blacksmith Leigh Louthan.
Racing
Loading...