While the National Football League schedule completed its first week of the 2016 season on Monday night with games on opposing coasts, Rosecroft Raceway will kick off its fall meet on Tuesday evening with another new group at the helm, this time the Maryland Jockey Club.

In actuality, this will not mark the first time in Maryland racing history that the ownership group shared common ground. Frank DeFrancis, who was instrumental in reviving horse racing in Maryland, owned Freestate Raceway
[now defunct] before purchasing Laurel and Pimlico. DeFrancis would later sell Freestate to Mark Vogel, who also owned Rosecroft and opted to close Freestate, which had the summer dates, and keep Rosecroft open year-round.

Rosecroft has changed hands several times since then and competed for simulcast revenues with Laurel and Pimlico until this summer when the Maryland Jockey Club purchased the historic Maryland five-eighths mile oval. Laurel Park will offer live thoroughbred races Friday-Sunday each week through the end of the year, while Rosecroft will have live races on Tuesday and Thursday evenings through Dec. 15 with a first race post time of 6:40 p.m.

Rosecroft will also have an expanded wagering menu this fall beginning with the Tuesday opening card. Each race the track will offer the standard win, place and show wagers along with exactas and triples and now superfectas are being added to each race. Rosecroft will also have a Pick-5 on the latter half of the card with a 12-percent takeout beginning with the seventh race each night. If no one picks all five winners, 25 percent of the pot is paid out to the players with the most winners while the other 75 percent is carried over to the next program. 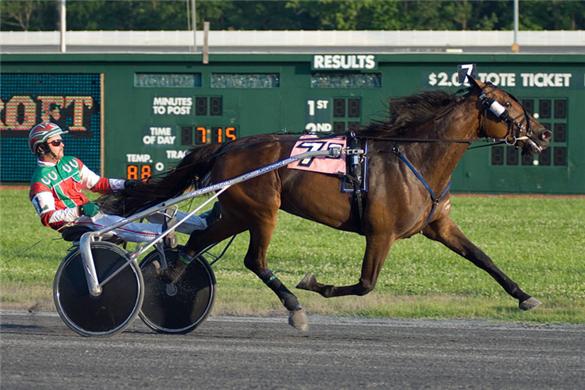 Tuesday's opener is a solid non-winners of $4000 last five conditioned event that could go to a trio of pacers. Rebel Soldier (Frank Milby) will leave from post nine in the second tier and is the only starter not on lasix, but the Steve Warrington-trained homebred boasts a 4-2-3 slate, $20,000 bankroll and 1:53.1 score here and looms the one to beat. Dancing Rusty (Russell Foster) and Metro Angel (Jared Moyer) will start from posts three and four, respectively, as serious contender in this spot.

Right at the midway point of the card is the $12,000 Open where the inside three horses will vie for favoritism and the lion's share of the purse. Three Day Forecast (Brandon Henley) draws the rail for trainer Shawn Murray and owns a 7-4-2 slate and $35,000 bankroll and 1:51.1 mark from 23 starts, while Diamondkeeper (Roger Plante, Jr.) brings a solid 8-2-5 slate, $46,000 bankroll and 1:52.1 mark from 24 outings. Diamondkeeper was the selection as Ocean Downs horse of the meet by the Mid-Atlantic Chapter of the United States Harness Writers Association.

Two races later in a non-winners of $4500 last five starts class for older pacers, Zoeez Boy Henry looms the solid choice from post nine in the second tier for trainer-driver Frank Milby. But several others on the gate including Jet Blue Miracle (Sean Bier), Concert Artist (Christopher Offutt) and Cruising West (Plante) will all seek to make their presence felt. Jet Blue Miracle and Concert Artist were both fixtures in the top class here during the spring meet, with Concert Artist tabbed as horse of the meet by Rosecroft track management.

Then two races later in another competitive non-winners of $4000 last five starts class for older pacers, Bad Man Sam (Foster) rates as the lukewarm favorite in here following a solid meet at Ocean Downs for trainer Jason Bowers, while Chesapeake Bay, Cracker Pullet, Roktavius and Black Aquila A all merit respect in this spot. Roktavius was among the top younger horses here during the spring meet for trainer Megan Roberts and looms a contender in this spot against veteran older campaigners.

Monday evening at Harrington Raceway, Mel Mara (Corey Callahan) tuned up for next week's $200,000 Bobby Quillen Memorial by capturing the $16,000 Open as the prohibitive 1-9 favorite in wire-to-wire fashion in 1:50.1 for trainer Dylan Davis. Mel Mara has already faced Wiggle It Jiggleit, Always B Miki, Freaky Feet Pete and Luck Be With You on several occasions this season and he will likely see at least two of them again next Monday for the Quillen. Tuesday's post position draw is going to be a big factor in strategy and the outcome of that event.

On Wednesday evening Harrington will highlight Childhood Cancer Awareness Month by naming the sixth race in its honor. The Open event for trotters, which features former standout I Like My Boss, will highlight the plight of youthful cancer victim, Layla Mosley, 5, granddaughter of trainer Joe Hundertpfund, Jr., who has been undergoing chemotherapy for several months following surgery on her ribs. Mosley is expected to be on hand for the winner's circle presentation.
Racing
Loading...