As always, opening day for Santa Anita's winter spring meet happens on Dec. 26, the day after Christmas. Two Grade 1 Races, the Malibu and Labrea, take place that day along with two Grade 2 races, the San Antonio and the Mathis Brothers Mile on the turf.

For my family and me, Santa Anita Opening Day ushers in the new racing season. That season lasts all the way until the Breeders' Cup. With opening day right around the corner, I thought it might be a good idea to go over some of the things to look for this Santa Anita Park Winter/Spring Meet. 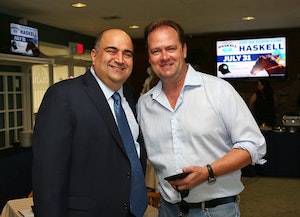 Like I wrote in an earlier blog, Frank's a people person. He engages with fellow horseplayers because like us, he has a passion for the sport. He loves horse racing, which is why from his first day on the job he should be an instant success.

Don't expect Frank to unleash one of his patented impersonations on Saturday race days. Saturdays are often too serious for that. But, I'm hoping he won't be shy on Thursdays when true horseplayers are paying attention to the races while traversing through our day jobs.

Which Baffert Sophomore Will Step Forward?

Game Winner's the obvious choice, but just in the past month Bob's unleashed a plethora of Kentucky Derby contenders. I just published a blog about my Top 4: Game Winner, Coliseum, Improbable, and Mucho Gusto. Remember, Justify didn't break his maiden until 2018 and he went on to win the Triple Crown.

So, Baffert's got a lot for us to look forward to. Which soon to be 3-year-old takes the biggest leap forward? My money's on Coliseum. Godolphin thinks so highly of the Tapit sired youngster that they sent him to Derby Bob so that the legendary racing outfit can finally take home a Triple Crown event.

What Older Horse will Emerge as the Best in the West After Accelerate's Retirement?

Accelerate's scheduled to retire after January's Pegasus World Cup. Win or lose, his days on the racetrack should be over. Lane's End can't wait to get him breeding. Makes sense because he dominated a deep group of runners in the Breeders' Cup Classic after owning his foes the entire year at both Santa Anita and Del Mar.

Now that the best horse in the world is headed to retirement, who figures to step it up in SoCal? Bob Baffert's got one in McKinzie. I'm partial to McKinzie because Mike Pegram owns him. But, the horse to really keep an eye on is another John Sadler trained runner.

John could have his next Accelerate already waiting in the wings. McKinzie, Catalina Cruiser, and City of Light could make for a formidable SoCal group of older horses.
Racing
Loading...