The thoroughbred racing world will focus its attention on Saratoga Race Course as the historic upstate New York oval hosts an exceptional card featuring six Grade I events, capped by the Travers Stakes, the famed "Mid-summer Derby" for three-year-old colts. 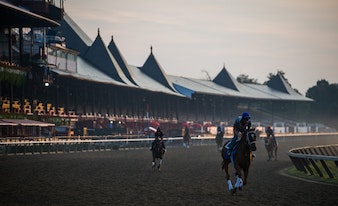 Ideal conditions are expected for the entire Saturday card at Saratoga and owners and trainers will have little excuses to offer when their respective runners get beat other than the long-accepted adage that the track is known as the "graveyard of favorites". Those who make it a habit of trying to beat the favorite each race regardless of it's for Grade I horses or maiden claimers will have ample chances to do so on Saturday at the Spa.

Saturday's sixth race in the Grade I, $750,000 Personal Ensign Stakes for fillies and mares and the compact field of five distaffers does not include an absolute cinch or even a genuine toss.

Curalina will likely go postward as the favorite in the Personal Ensign having won the Grade III Shuvee Stakes over the track last out by nine lengths for trainer Todd Pletcher. She has won twice in three starts this year and sports a solid 6-2-2 slate and $1.4 million bankroll from 11 career tries. She did win her last outing easily over the strip, but horse players should always be cautious of horses duplicating such performances when stepping back onto a dry, fast track.

Cavorting has also won twice in three starts this year for trainer Kiaran McLaughlin and owns seven wins and earnings of $1.6 million from 12 lifetime outings. Cavorting has won all three of her starts at Saratoga, but this will mark the first time in her career that she will attempt to navigate two turns and even the best one-turn closers often have a difficult time making the transition to the second turn the first time.

Forever Unbridled has also won twice in three starts this year and banked nearly $800,000 for trainer Dallas Stewart  and owns a solid 4-3-2 slate and $1.1 million bankroll from 11 lifetime outings. She was second in the Grade I Ogden Phipps last out behind Cavorting, but she did annex the Grade I Apple Blossom Stakes at Oaklawn Park prior to that and looms a major threat back in a two-turn route in her Saratoga debut.

I'm a Chatterbox won the Grade I Delaware Handicap last out despite veering in sharply at the break and impeding three of her foes. Last summer I'm a Chatterbox won the Grade I Coaching Club American Oaks here but was disqualified and placed second behind Curalina, so the Larry Jones filly seems the most likely horse to be involved in an inquiry of some sort. Paid Up Subscriber, who finished second in the Del 'Cap and could have easily been placed first, will seek the first Grade I score in her career for trainer Al Stall, Jr.

One race later on the card, the Grade I, $500,000 Ballerina Stakes for fillies and mares at seven furlongs also appears to be very contentious on paper. Handicappers can make a serious case for one-half of the 10 starters, so a winner among the other five would pay very generous prices if either of them prevails.

Wavell Avenue regained her winning ways last out when she rallied from well off the pace to capture the $100,000 Shine Again stakes over the strip and the defending Breeders Cup Filly-Mare Sprint champion could be peaking at the right time for trainer Chad Brown. She has won seven of 17 starts overall and a check of any kind would push her lifetime earnings past the $1 million plateau.

Just to her outside is Carina Mia, most recently second behind unbeaten three-year-old filly sensation Songbird in the Coaching Club American Oaks. This Bill Mott trainee will try older fillies and mares for the first time on Saturday and drops back into a one-turn stakes, having won both the Grade I Acorn at Belmont Park and then Grade II Eight Belles at Churchill Downs. She has won twice in four starts this year and four times in seven career tries for Mott.

But a trio of other fast fillies also pose upset chances. Paulassilverlining has won three times and been second twice in five starts this year and was the beaten favorite in the Honorable Miss Stakes last out and merits a chance to rebound here. By The Moon outlasted Wavell Avenue to capture the Grade III Bed O'Roses at Belmont last out, while Sheer Drama returns to a sprint after two modest efforts routing after opening the campaign with a score in the Grade I Madison at Keeneland for owner David Fawkes.

One race later on the card the Grade I, $500,000 King's Bishop Stakes for three-year-olds going seven furlongs also appears very wide open. Drefong is the 4-1 morning line favorite and the post time choice might actually been a slightly higher price.

Drefong arrives having won his last three starts for trainer Bob Baffert, including consecutive allowance races at Santa Anita. But this will be his first time against stakes company and he will break from post 13, meaning he will need to display ample speed early and still have something left in reserve left while avoiding being parked wide on the far turn. All those factors could eventually weight against him.

Summer Revoltion has certainly displayed the best performance over the oval, having won a seven-furlong allowance in 1:21 over the strip for trainer Rudy Rodriguez. But Summer Revolution also arrives light on seasoning, having won both of his starts at the distance by a combined 10 lengths. He will try stakes foes for the first time and will have to break well from post three to avoid being shuffled out of contention.

Mohaymen arrives as the most recognizable name, having won the first five starts of his career for trainer Kiaran McLaughlin before running fourth in the Florida Derby, Kentucky Derby and Jim Dandy. Having earned just shy of $1 million from eight career tries, Mohaymen appears to be in Plan B mode at this point and the jury is still out on his ability as a sprinter.

Tom's Ready posted a mild upset to capture the Grade II Woody Stephens Stakes at this distance on Belmont Stakes day and looms a serious player from post 12 for trainer Dallas Stewart. Fish Trappe Road and Economic Model were one-two in the Grade III Dwyer last out, while Canadian invader Noholdingback Bear could light up the tote board if he can transition his synthetic track form to the Spa. He was second as the 2-5 choice in the Grade III Bold Venture last out at Woodbine, so expect him to be at least 14-1 in this spot.

Then one race later in the Grade I, $700,000 Forego Stakes for older horses going seven panels, much of the attention will be focused on the two horses that drew outside - A.P. Indian and Marking.

A.P. Indian has emerged as the best older sprinter on the east coast this summer, having won all four of his starts and earned over $525,000 for trainer Arnaud Delacour. He also followed up a victory in the Grade III Belmont Sprint Stakes with a determined score in the Grade I Alfred G. Vanderbilt. He owns a solid 9-4-0 slate and $740,000 bankroll from 15 career tries, so a win here would make him a millionaire.

Just to his outside is Marking, a four-year-old Bernardini colt trained by McLaughlin for Godolphin. Marking was most recently second in the Belmont Sprint behind A.P. Indian and arrives in search of his first Grade I tally. He won the first two starts of his career handily and won once in three tries at Meydan before returning stateside to be crushed by stablemate Frosted in the Met Mile. At least a handful of others merit respect in this spot. Stallwalkin Dude won the Tale Of The Cat Stakes over the strip last out for trainer David Jacobson and brings a solid 15-4-6 slate and $830,000 bankroll from 43 lifetime tries. Catalina Red was third in the Vanderbilt last out. Chief Lion was the beaten favorite in the Tale Of The Cat, while Anchor Down was sixth in the Vanderbilt after running second in the Met Mile following a tally in the Grade III Westchester for Pletcher. 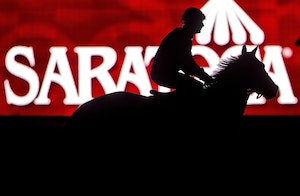 Then one race later in the biggest turf race on the card, all eyes will certainly be focused on Flintshire who will seek to defend his title in the Grade I, $ 1 million Sword Dancer and will likely be the odds-on choice to do so. Flintshire is clearly among the best turf horses in the world, having finished second in each of the last two editions of the famed Arc de Triomphe at Longchamps. he has won both of his starts this year for trainer Chad Brown, including the Bowling Green over this course.

Those not convinced that Flintshire is unbeatable in the Sword Dancer have several good options. Grand Tito was second to him in the Bowling Green and sports a 9-8-5 slate and $720,000 lifetime bankroll from 36 starts that includes a win in the MacDiarmida to start the year. Money Multiplier won an allowance here after finishing second in both the Grade I United Nations and Grade I Manhattan, while Twilight Eclipse is no stranger to Grade I events and owns an 8-5-9 slate and $1.9 million bankroll from 34 outings. He has finished second once and third three times in five winless outings at Saratoga.

Following the Sword Dancer is the Grade I, $1.25 million Travers Stakes, the famed "Mid-Summer Derby" for three-year-old colts and geldings. 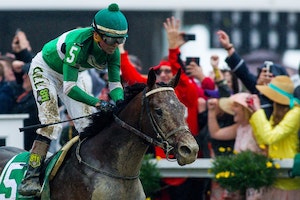 Preakness Stakes and Haskell Invitational Exaggerator (Kent Desormeaux) looms as the 3-1 choice in the Travers, but onlookers are weary of his fast track form. Granted, he did finished second to Nquist in the Kentucky Derby over a fast Churchill Downs strip, but his biggest performances have come in the off going with emphatic scores in the Santa Anita Derby, the Preakness and the Haskell. He is the early favorite to capture this event and three-year-old honors, but he is hardly a cinch in this spot considering the Saratoga strip will be fast on Saturday.

Those eager to play against Exaggerator in the Travers tomorrow for any reason will have numerous prospects to choose from.

Creator has won three of seven starts and banked over $1.5 million this year, including victories in the Grade I Belmont Stakes and Arkansas Derby. Belmont winners have returned to win the Travers 27 times, so in a sense history is on his side.

Both Connect and Laoban own a win over the track this summer. Connect has won all three of his starts this year for trainer Chad Brown, including the Curlin Stakes. Laoban actually broke his maiden by taking the Grade II Jim Dandy in wire-to-wire fashion at 27-1 last out for trainer Eric Guillot.

Both Destin and Gun Runner were on the Triple Crown trail in the spring. Destin, who won a pair of graded stakes at Tampa Bay Downs, would later finish second in the Belmont and was most recently third in the Jim Dandy for Pletcher.

Gun Runner won a pair of Grade II stakes at the Fair Grounds for Asmussen then was third in the Derby. He was most recently fifth in the Haskell but figures to improve on a fast track.

Trainer Bob Baffert will saddle a pair of sophomores for the Travers as he seeks to play the spoiler role after American Pharoah was stunned by Keen Ice in the Mid-Summer Derby last year.

American Freedom has won three of five starts and banked over $450,000 although his best performance came when second in the Haskell. Arrogate has won his last three starts and heads east seeking his first stakes tally.