This coming Saturday night standardbred racing fans will want to focus their attention on a pair of tracks, Scioto Downs in Ohio and Yonkers Raceway in New York, where the sport's best older horses will be competing throughout the night and looking to secure an invitation to the $200,000 Bobby Quillen Memorial at Harrington on Monday, September 19.

Of course, at least a handful of older pacers eyeing the Quillen will be at Scioto Downs on Saturday night for the $225,000 Jim Ewart Memorial. Among the nine pacers set to go postward are seven that merit an invite to the Quillen, although at least three of them will likely decline since the race will be conducted on a half-mile oval. But there are several that will certainly accept the invite.

Reigning horse of the year Wiggle It Jiggleit (Montrell Teague) has once again emerged as the best horse in the land, having won 12 of 19 starts and nearly $1.3 million including last weekend's handy score in the $650,000 Canadian Pacing Derby at Mohawk Racetrack in Canada. Wiggle It Jiggleit had the misfortune of drawing post eight in the Ewart on Saturday, but Scioto Downs is a five-eighths mile oval so her will have plenty of time to leave and clear his rivals before the opening quarter mile or before passing the finish line the first time.

But several pacers to his inside will certainly make him work to get there. Rockeyed Optimist has the rail and owns 11 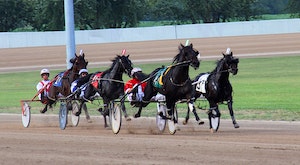 wins and $270,000 banked from 18 starts this year for trainer Steve Elliott. All Bets Off (Matt Kakaley) has been the best of the Ron Burke brigade this season and brings a solid 3-5-5 slate and $470,000 bankroll from 19 starts including a fourth-place finish in the Canadian Pacing Derby. Luck Be With You owns tremendous early speed and thrives on the smaller tracks and this Chris Oakes trainee has five wins and earnings of $155,000 from 13 starts this year.

But the two biggest threats to Wiggle It Jiggleit drew toward the outside as well. Always B Miki (Brett Miller), once ranked as the top pacer in the land, owns a 6-4-0 slate and $765,000 banked from just 11 starts this year. But this Jimmy Takter trainee has been humbled by 'Wiggle It' in their two most recent encounters, the Dan Patch at Hoosier Park and last week's Canadian Pacing Derby and the effects of those fast miles early in the season appear to be taking their toll on this five-year-old who will likely decline an invite to the Quillen.

Then from post nine comes Freaky Feet Pete (Trace Tetrick), who has beaten 'Wiggle It' several times over the last two years and brings a solid 6-2-1 slate and $345,000 bankroll from 12 starts into this spot. Freaky Feet Pete emerged on the scene last summer and fall at Hoosier Park, but his last several efforts - including the Dan Patch on his home track - have left plenty to be desired and he also appears an outsider to join the fray in the Quillen.

Yonkers will not offer any stakes this weekend, but the solid overnight card is filled with potential horses that could earn an invite to the Quillen.

In fact, the fifth race, a non-winners of $25,000 last five starts class for older pacers, features Mach It So (Jason Bartlett), the defending champion of the Quillen. Mach It So has not quite reached the performance level that he did one year ago and arrives with five straight losses and earnings roughly one-fourth of what he achieved last season, but the Jeff Bamond, Jr. trainee has to be respected in this spot and it could propel him back to the Quillen.

Two races later in a winners over $25,000 last five starts class, Arque Hanover (Brian Sears), an unlucky third after an equipment failure last week, tackles Open regulars Sapphire City and Great Vintage and Open and Levy fixture Take It Back Terry (George Brennan), one of the Burke brigade looking to get a Quillen invite. Arque Hanover was the dominant force at Harrington for two starts before his Yonkers outing last week, but both Sapphire City and Great Vintage will test him early and often.

Then one race later in the $45,000 Open, Mcardles Lightning, PH Supercam (Bartlett), Doctor Butch (Brent Holland), Bit Of A Legend (Jordan Stratton), Always At My Place (Brennan) and The Real One (Pat Lachance) all appear likely candidates in this spot and potentially for a Quillen invite.

Mcardles Lightning is the second-best horse for Elliott, but he raced well in this class last week and gets the rail. PH Supercam has been a regular in the Open and the Levy and might be Bamond's best hope for a Quillen score this fall. Doctor Butch tried the Quillen two years ago. Bit Of A Legend was the dominant force in the Levy series earlier this spring at Yonkers, but his form has dramatically tailed off since then. He has always thrived over this oval and was second to 'Wiggle It' in the Gerrity, so he still merits respect here.

Always At My Place is another member of the Burke brigade looking to earn an invite to the Quillen, but like Mach It So he has not been hitting on all cylinders this season after a stellar end to his previous campaign. He displayed good late energy when third behind Luck Be With You and Mel Mara last week in the Open at Pocono Downs. The Real One won two straight Opens here before being assigned the eight hole twice and now will look to rebound and perhaps earn an invite to the Quillen.

Then in the Yonkers finale, Foiled Again (Brennan) will be looking to prove that he merits another shot at a fourth Quillen title. Second to Mach It So in last year's edition of the Quillen, Foiled Again has meandered through a tough campaign this year at age 12, posting a modest 2-4-3 slate and $70,000 bankroll from 18 starts. But the sport's all-time richest pacer courtesy of an amazing 88-62-40 slate and $7.4 million bankroll from 264 starts, perhaps deserves one last chance to prove that he can make yet another appearance in Harrington's lone Grade I event on the schedule.

Speaking of Harrington, the Delaware half-mile oval will give a handful of local pacers one last chance to audition for the main event this Monday when it presents a $15,000 Open just past the midway point of the card.

Mel Mara (Corey Callahan) looms as the odds-on favorite despite being assigned post six on the outside since the Dylan Davis trainee has already danced with Always B Miki and Wiggle It Jiggle It on several occasions this summer. He brings a solid 5-4-2 slate and $165,000 bankroll from 18 starts into the Open, having finished second to Luck Be With You in the Open at Pocono Downs last weekend after winning an Invitational there the week before in 1:47.2. He also owns a 1:47 mark courtesy of a win over Always B Miki at the Meadowlands.

Looking to spoil the Quillen prep for Mel Mara and possibly get an invite from the race office are Getitoffyourchest (Ross Wolfensen), Little Ben (Victor Kirby), Dancin Yankee (Russell Foster), Remember Me VK (Teague) and Handsome Henry K. Dancin Yankee owns a 6-7-2 slate and $90,000 bankroll from 22 starts this year and 52 wins and $1.47 banked from 155 lifetime outings for trainer Josh Green. He was among the best older pacers in the land two years ago.
Racing
Loading...