In the final weekend before the Christmas holiday, standardbred racing fans will be seeking one last chance to pad their bankrolls and there best chance to do so could be Saturday night at The Meadowlands. 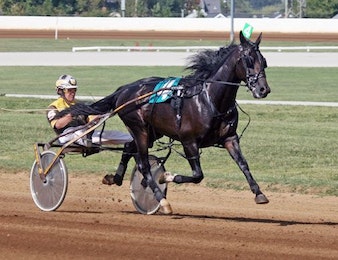 In the second race, a non-winners of two races or $20,000 lifetime class for younger pacers, the event looks to be a virtual match race on paper. But one of the colts is well worth backing. Brick Bazooka (John Campbell) arrives with an unbeaten record from four starts for trainer Larry Remmen, including a sharp 1:53.1 score as the 1-9 choice last week. Although listed as the 8-5 second choice on the morning line, he will likely go favorite despite the presence on 6-5 morning line choice Franzo (Scott Zeron) who prevailed two weeks ago in 1:53.2 for trainer Jim Takter. Brick Bazooka should have the fitness edge on his main rival this evening.

Then one race later in the third, a non-winners of four races or $75,000 lifetime class for three- and four-year-old pacers, look for Rockeyed Optimist (Tim Tetrick) to atone for his third-place finish as the 9-5 favorite in this class last week. Rockeyed Optimist attempted to rally from well off the pace and widest of all while missing the previous week, but he should be much sharper this evening and perhaps have a chance at repeating his 1:51.3 score two starts back on Nov. 29 when he overcame a first over trip to win by five lengths.

Then several races later in the 12th, a non-winners of three races or $40,000 lifetime class, give Steady Warrior (Mark MacDonald) a good chance for the upset despite starting from post 10. He displayed plenty of grit while settling for third last week as the 3-2 favorite, brushing to the half in a stout 55.3 before giving way in the lane. Despite the outside post, that race should have tightened up Steady Warrior for a score this evening.