This Saturday afternoon and evening a pair of thoroughbred tracks in the Mid-Atlantic region will offer several lucrative stakes, while a harness oval in that region kicks off its 2015 fall meet.

Saturday afternoon Laurel Park will host a pair of lucrative, Grade II stakes basically on loan from idle Colonial Downs. Laurel will offer the $250,000 Commonwealth Cup for older horses early on the card and then focus its attention to the three-year-olds several races later when it presents the $400,000 Commonwealth Derby. Both races are being presented by the Virginia Equine Alliance.

In the Commonwealth Cup slated as the fourth race on the program, Mr Speaker will garner much of the attention. This Phipps stable homebred trained by Shug McGaughey won the Grade I Belmont Derby last summer at age three and was most recently fourth as the 8-5 favorite in the Grade II Sky Classic at Woodbine.

But Mr Speaker is hardly a cinch in the Commonwealth Cup despite his stellar connections and Grade I credentials. Legendary faded to 12th in the Grade I Arlington Million in his most recent outing, but prior to that was a solid third in the Grade I Manhattan at Belmont Park on the Belmont Stakes undercard. He also owns a win over the course, having captured the Japan Racing Association Hcp here one year ago.

Several races later in the Grade II, $400,000 Commonwealth Derby, another Grade I winner will take center stage. Force The Pass, who won this year's edition of the Grade I Belmont Derby before finishing third as the 3-2 favorite in the Grade I Secretariat Stakes at Arlington Park on Million Day, looms the horse to beat in this event for three-year-old colts and geldings on the Laurel lawn.

That same evening Charles Town Race Course will host a trio of open stakes toward the end of a card that will begin with numerous local preps for the West Virginia Breeders Classics night here on Oct. 10. 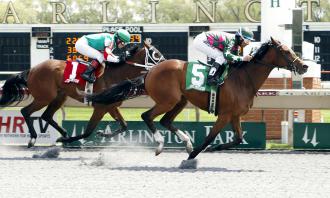 Having drawn the rail and sporting the best resume among the six runners, Sarah Sis is the likely choice in the Charles Town Oaks. A solid fourth in the Grade I, $500,000 Ballerina Stakes against older rivals last out, Sarah Sis won the Grade III Iowa Oaks before that and began the year by taking a Grade III event at Oaklawn Park.

Only two of her rivals have ever won an open stakes and a third, Temper Mint Patty, trained by Todd Pletcher, only owns two stakes scores against restricted New York-bred company. Toutsie Rules has yet to win a stakes and neither has Hot City Girl, who exits the Grade I Mother Goose at Belmont.

One race earlier a solid group will contend the $100,000 Wild & Wonderful Stakes. Pants On Fire has won 10 of 34 lifetime starts and boasts career earnings of over $1.5 million and even competed in last year's Breeders Cup Dirt Mile, so this Kelly Breen trainee looms the obvious choice.

But two stellar West Virginia-breds will be looking to upend him as they prep for the WV Breeders Classics. Lucy's Bob Boy won the Frank Gall Memorial last month in sharp fashion for trainer Sandra Dono and should be forwardly placed throughout, while Hidden Canyon, the beaten favorite in the Gall, will look to press the issue early and perhaps attain come revenge over 'Lucy' before the big night here.

One race earlier in the Pink Ribbon Stakes for fillies and mares, Checkupfromzneckup and Julie's Jewelry will garner plenty of support from their outside slots, but local distaffer Flattering Bea arrives in peak form for trainer Crystal Pickett. She has won six of nine starts over the local oval, including the 2014 Sugar Maple, while both 'Checkup' and Julie's Jewelry make their CT debuts.

That same night, Rosecroft Raceway in Maryland will kick off its 2015 fall standardbred meet with a 12-race card that offers a good blend of overnight events for trotters and pacers. The well-traveles Keystone Cocoa (Donald Dancer) looms the best trotter on the card in race five, while Racquel might have finally found the right spot for her first win of the year in the 11th race.