With the exception of a rough trip in last fall's Breeders Cup Classic at Santa Anita when he had to settle for fourth as the 5-2 favorite, Shared Belief has been a dominant force on the west coast. On Saturday afternoon he will take his talents on the road for the first time outside of California when he goes postward as the heavy favorite in the Grade II, $1.5 million Charles Town Classic (race 12). 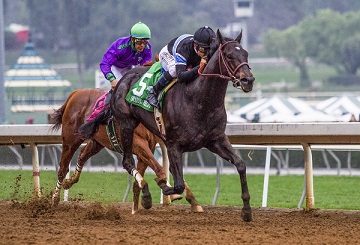 r-old Candy Ride gelding based at Golden Gate Fields for trainer Jerry Hollendorfer, Shared Belief has won 10 of 11 starts and earned nearly $3 million in his career. The nation's champion two-year-old colt in 2013, Shared Belief was in the chase for champion three-year-old colt and horse of the year until the outset of the Breeders Cup Classic when he was impeded severely by Bayern, who would go on to win the race and withstand a lengthy inquiry to remain the official winner. Shared Belief would settle for fourth that day, his first and lone setback in his career to date.

Since the Breeders Cup Classic, Shared Belief has regained his winning ways with three straight graded stakes scores, including the Grade I Malibu and the Grade I Santa Anita Handicap (video below) in his most recent start. Sandwiched between those tallies was a sharp score in the Grade II San Antonio in which he defeated reigning horse of the year, California Chrome. Shared Belief came right back to win the Grade I Santa Anita Handicap, while California Chrome ventured to Dubai and finished a good second to Prince Bishop in the Grade I, $10 million Dubai World Cup.
This Saturday afternoon - the Charles Town card begins at 12:45 p.m. on the east coast with the Classic slated for 6:05pm ET - Shared Belief will look to maintain his winning ways and further his claim as the best race horse in the country. He has worked sharply since the Big 'Cap, posting three straight 'bullet' workouts at Golden Gate before a modest 51.8 half-mile breeze on Monday. His regular pilot, Mike Smith, who won the Charles Town Classic two years ago aboard Game On Dude, will head east with the Candy Ride gelding.

Since he was sent out as the 3-10 favorite among 13 runners in the Santa Anita Handicap, Shared Belief is expected to be a similar price in the Charles Town Classic on Saturday. While several of his rivals have Grade I experience, only one of them, Moreno, has ever won a Grade I. The five-year-old Ghostzapper gelding trained by Eric Guillot and based at Los Alamitos, captured the Grade I, $1.5 million Whitney Handicap at Saratoga last August. He has since been second in two Grade I races, including the Big 'Cap when he finished four lengths behind Shared Belief.

Defending Charles Town Classic champion Imperative makes a return trip east for trainer George Papaprodromou, but the five-year-old Bernardini gelding has been winless in eight starts since then and was only moderately competitive in two of them. He finished third in the Grade I, $1 million Pacific Classic at Del Mar, but finished five lengths behind Shared Belief. In hi his most recent outing, Imperative was eighth in the Big 'Cap, a dozen lengths behind Shared Belief and jockey Kent Desormeaux opted not to make the return trip. 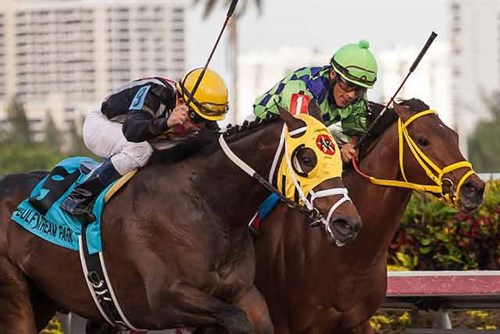 Last spring General A Rod (pictured) was one of only three runners to contest  all three legs of the Triple Crown, finishing 11th in the Derby, fourth in the Preakness and then seventh in the Belmont while California Chrome won the first two legs then was fourth behind Tonalist in the Belmont. General a Rod won the Challenger Stakes at Tampa Bay Downs in his most recent outing and the Todd Pletcher trainee will have the services of John Velazquez on Saturday, but he will have to improve considerably to upend Shared Belief.

A glimpse at the others reveals a group of runners that will have to improve as well to be factors. Vyjack owns a pair of Grade II wins in his career, but was the beaten favorite in two stakes over the inner track at Aqueduct this winter. Street Babe arrives as the least experienced horse in the field, having won twice in three starts including a 21-1 upset in the Grade III Mineshaft at the Fair Grounds. Page McKenney has won his last two starts against open stakes rivals at Laurel Park, but has yet to succeed in graded company, while Warrioroftheroses has lost four straight since winning a pair of allowance races at Laurel.

The Charles Town Classic (race 12) is the fourth leg of the $100,000 all-stakes PICK FOUR and many expect it to have a very chalky ending with Shared Belief prevailing as the odds-on choice. But an upset or two in the first three legs could still reward backers with a healthy payoff if you play at BetAmerica.

In the third leg of the Pick 4 (race 11),the $150,000 Sugar Maple Stakes for fillies and mares, defending champion Flattering Bea is expected to be the odds-on favorite. The Crystal Pickett trainee ended a six-race skid dating back to her 2014 tally in the Sugar Maple when she prevailed in the Violet Handicap over the CT strip last month. Flattering Bea has won five of her seven tries at Charles Town and will be tough to beat in this spot, but two others look worthy of playing in the sequence. Nesso ships north from Tampa Bay Downs where she won two of three allowance events for trainer Sandino Hernandez. Found tuned up for this even with a 10-length victory over the strip for trainer Carla Morgan, her second win in three local tries traveling two turns and both were daylight scores.

One race earlier (race 10) in the $100,000 Robert Hilton Memorial for three-year-old colts, expect Control Stake to start as the odds-on favorite for trainer Tom Amoss, who sent Rise Up to win the race last year by eight lengths. But Control Stake has been idle since taking the Big Drama Stakes at Delta Downs in January, so he could be primed for an upset.  In fact, a trio of runners all have sharp wins over the track and are worth playing. Charitable Annuity has won his last two starts for trainer James W. Casey and owner Mark Russell of Russell Road fame. Arkaybee has won his last two outings and three of four tries for longtime local trainer Ronney Brown, while Attempt to Dream has won three of five local starts for trainer Angel Gonzalez.

In the opening leg of the sequence (race 9), the $50,000 It's Binn Too Long Stakes for state-bred three-year-old fillies, three ladies have to be used. Country Mamma has won four of five local starts and will look to regain her winning ways for trainer Ollie Figgins, III of Dance to Bristol fame, Goodbye Kiss was a six-length winner at the distance in her second start and Get the Sensation has won her last two starts at the one-turn dash distance, draws outside and could be a budding local star.