Sibling rivalries might be commonplace among families and sports teams, but Tuesday evening at Rosecroft it was a sibling tandem that scored a double on the opening night if the 2016 World Series.

Trainer Megan Roberts and catch driver Jonathan Roberts not only recorded a double on the Tuesday card they combined to win consecutive races on the back half of the program with Rocktavius and Caviart Tyler, both pacers owned by Hunter Colton and William DeLodovico. 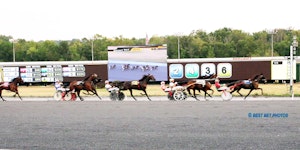 Rocktavius, a three-year-old Rocknroll Hanover colt out of a McArdle mare, gained command soon after the start and led throughout to score narrowly over Breezeintheshade (Jared Moyer) in 1:53.1. Unraced at age two, Rocktavius now sports a solid 8-6-5 slate and $42,000 bankroll from 29 starts this year and Tuesday was his second win in four outings at the current meet.

Then one race later on the card the classy veteran campaigner Caviart Tyler benefited from a similar tactic when he gained command soon after the start and set honest fractions en route to a three-length score in 1:51.4. A nine-year-old Dragon Again gelding out of a Western Hanover mare, Caviart Tyler now owns a 7-2-1 slate and $32,500 banked from 31 starts this year for Roberts and his latest tally represented a new seasonal mark.
Racing
Loading...