SoCal Jockeys: A horseplayer’s five favorite jocks in the sun of SoCal

Southern California has been the home of some of the best jockeys in the world for quite some time. More than a few hall-of-fame riders have made their home in SoCal and more than a few routinely ride day in and day out at Del Mar and Santa Anita. Santa Anita Park, in particular, has become a hot bed of great jocks.

The current colony at Santa Anita is so deep that it was very difficult for me to come up with my Top 5. Based on what I’ve seen over the years, and the way that they are currently riding at this meet, I think my Top 5 is fair. That’s not to mean that the guys that I’ve left off, Tyler Baze, Martin Garcia, Martin Pedroza, Joe Talamo, etc. all, are jockeys that I’d stay away from. I’m just saying that the below list are my favorites at this time.

Truth be told, if Chris McCarron, Garrett Gomez, or Eddie D. ever started riding again, they’d all jump to the top of the list. So, my list isn’t gospel by any stretch of the imagination.

A Horseplayer’s Five Favorite Jocks in the Sun of SoCal 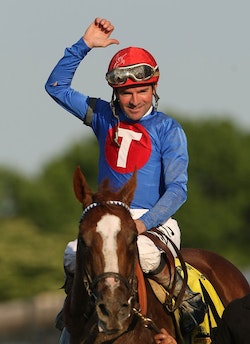 1. Kent J. Desormeaux – Kent D. is winning at 17% at the meet. His horses are finishing in the money 47% of the time. That’s incredible considering that Desormeaux hasn’t had an easy time of it in his career. In April of 2013, DRF actually ran a story about how Kent’s ability to ride had suffered. There was also a riff between Kent and his brother Keith Desormeaux. It’s nice to see one of the best riders to ever jump onto a racehorse come back so brilliantly from those setbacks. 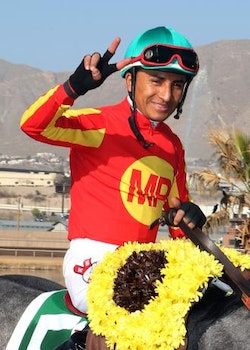 2. Rafael Bejarano – Sure, a lot of horseplayers bemoan the fact that Rafa doesn’t dominate on Breeders’ Cup Day. Hey, I get it. Michael Jordan was expected to hit every shot as well. Let’s think about it this way, Rafa gets pressure on BC Day because he dominates at every track in Southern California. When Hollywood Park ran races, he dominated there. The man can ride a horse with any style on any surface at any distance. He’s so good that I’ve gotten used to upgrading any horse that he’s on by at least 1 to 2 lengths. He’s the top jock at the current Santa Anita Meet with a stunning 26% win rate. His mounts finish in the money 57% of the time. 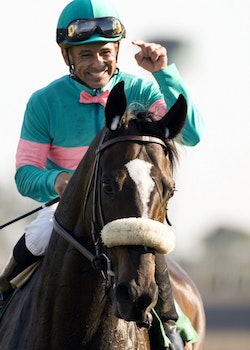 3. Mike Smith – Sometimes I’ve questioned his rides. I mean, he really didn’t need to try and pull a Secretariat on Bodemeister in the 2012 Kentucky Derby, but he’s also won aboard some major long shots like Giacomo in the 2005 Kentucky Derby. Mike’s only had 49 mounts at the current Santa Anita Meet, but his horses are second to Rafa’s in finishing in the money at 53%. The man is a legend and isn’t it wonderful that legends, hall-of-fame riders like Mike Smith, Kent Desormeaux, Russell Baze and Gary Stevens can still lace them up and win in horse racing? This is the only sport where that happens. 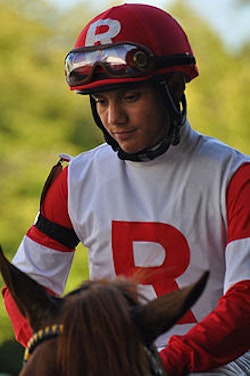 4. Elvis Trujillo – Elvis has won 12 races from 86 mounts so far. His horses are finishing in the money 36% of the time. That’s important to note because Trujillo, who’s fairly new to the SoCal colony, doesn’t often get the best horses in every race. What I love about Trujillo, who was born in 1983, is that he’s one of the most aggressive riders that I’ve seen in a long time. He doesn’t often get cute. Instead, Elvis likes to force everybody else’s hand by pressing the pace from the outset. He reminds me of Patrick Valenzuela in that regard. 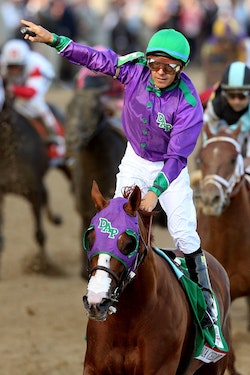 5. Victor Espinoza – Forget the fact that he is California Chrome’s jockey. The most brilliant ride that I’ve ever seen, because Victor was the only one with enough guts to try it, was in the 2002 Kentucky Derby. The Derby is known as having a fast pace, right? Why go to the lead and try to steal it. That’s impossible! Not for Victor Espinoza. All Victor did was take War Emblem to the lead and wire a field that included Medaglia D’Oro, Perfect Drift, Came Home, Johannesburg and Harlan’s Holiday. Victor’s mounts are finishing in the money 46% of the time. He’s won 12 races from 67 mounts so far this Santa Anita Meet.